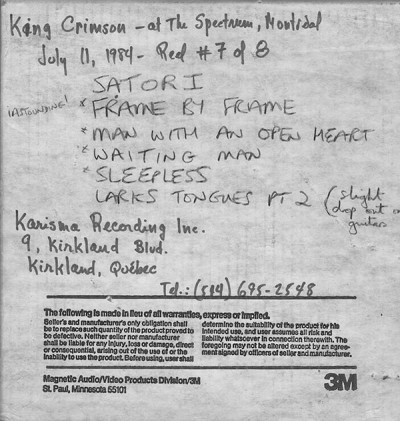 Mixing a recorded studio performance is always a translation. Mixing a live performance is even more a translation, because it attempts to represent a wider event than can be contained within the studio.
David Singleton and I don't mix as such. Probably, a Ton Prob production presents a particular worldview. We are not neutral, nor purely responsive, nor can we quite direct the action: but all three are involved. Essentially, our aim is to be true to the musical event in its moment.
The key word to the Ton Prob production of Absent Lovers, and one to which we kept returning, was "definition"; not in the sense of limitation, but of clarification: by delineating the edges and containing the boundaries, spaces between are more clearly illuminated and the players thrown into greater relief.
Generally, with regard to the presentation of live performance, this is not necessarily welcome to musicians whose idiosyncracies, conceits, illusions and failings may be revealed to the gaze of a critical ear. As one of the four musicians under present revelation, I am sympathetic; but responsibility to the larger translation holds my greater loyalty.
If, as in much recorded rock music, the studio album is viewed as a definitive text or score, then live performance is an interpretation of that text; and an album of live performance is only one particular translation of one specific interpretation, and that in a given context of time, place and person. So what is "definitive"?
Firstly, the live performance of music is in its nature ephemeral. This, it shares with gardening. However, our experience of what is, on the surface, a relatively brief event may resonate in our lives to profound and continuing effect. Simply put, music can reach over and change our lives directly and immediately. Our experiencing takes place in sequential time, but is not always governed by it.
Secondly, if the continuing regard by members of a listening community for a particular performance, or performers, is worthy of attention - and how could it not be? - then the curious may be willing to heed the interests of that community. Absent Lovers continues to be available as a bootleg thirteen years after the radio broadcast.
Thirdly, in a post-modern world there is no one privileged position, translation nor interpretation. This necessarily implies that there are indeed privileged positions of translation and interpretation. This dictum applies, and otherwise, to the material interpreted by this incarnation of Crimson one evening in Montreal during July 1984.
If these comments seem to obscure the clarity which definition claims, I reply that clarity reveals a depth of perspective, a richness of potential, and a spectrum of experiencing within the material which may elude a surface examination. Or not.
Either way, here it is.
Robert Fripp, February 20th 1998.
Taken from the sleeve notes to Absent Lovers  by