The Orchestra Of Crafty Guitarists 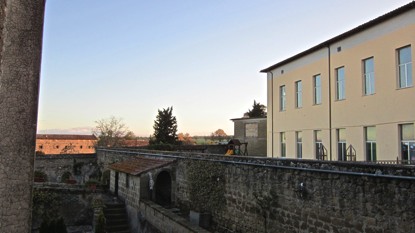 Words on The Assumption Of Virtue, the Eighth Assumption of Work In The Circle: this is the invisible Assumption. Assume the virtue if ye have it not. What is the virtue, or qualities and characteristics, of the ideal musician of our aspiration? Perhaps put more simply, what are the characteristics and qualities that we would associate with the Master Musician? It's not much use to say– they’re really very very good! – which doesn't help us in any practical sense. Among the qualities we would hope to find in the Master Musician is presence. Perhaps the most important quality we would ask of our ideal Musician is that they are true. If they are not present in performance, then they are lying. This is almost unforgivable. It is forgivable, but not by mortals.

The Second Assumption, after Intention, is Presence. When the Circle moves into the public sphere, it becomes vulnerable. The Circle is subject to the arbitrary impulses, unreasoned expectations and demands of the audience. Members of the public are not, in the main, trained in listening; which follows the same principles as training to play an instrument. In performance, the Circle is interacting with people who are mostly untrained in both intentional listening and the cultivation of personal presence. This is dangerous. So, the Presence of and within the Circle/s is necessary.

When the Outer Circle is playing and the Inner Circle not playing, the Inner Circle continues to be part of the overall performance. That is, they maintain their personal presence and remain intentionally within the performance, albeit while appearing to be Doing  Nothing.

It may be that less experienced members of the Inner Circle, when not playing, become as-if members of the audience – we're here to listen to all these guitarists playing funny things! – so we can let go of personal presence, twitch a little, move our feet about, and think this is fine because we're not performing. As Senor Nunez reminded us yesterday evening, even when not playing a note we continue to be part of The OCG, and the Seven Assumptions remain: we are asked to be present. Those less experienced members of the Inner Circle, who fall asleep when not performing, will not have a finger pointed at them (a finger was pointed at one of our number).

An easy assumption to make, by those playing in public, is that we go out to play in public to enjoy ourselves. This was very much the assumption of the young players of my teenage years. We took it seriously, but we hoped to have a good time playing. In the Guitar Circle and The OCG, we are not here to have a good time. We are here to serve something higher: the Creative Impulse manifested through Music. It may be that, in serving music, we have a good time, even that we experience joy, but this is not our primary aim: it is only a by-product of our work. In a sense, we give up what we want from the performance that the performance might become something more. We sacrifice our demand to have a good time for the possibility of something far more substantial taking place. When Angels descend from the heavens in chariots of gold and blow trumpets in your ear, this is joyful. Baby Blue, I was there.

Mrs. Moscow asked a question about discharging the role of Queen Vicious when in pole position of the Whizzing.

A:    The Whizzing will speak to you directly. And we learn on our feet.

Director Nunez, our promoter and friend, one that we can trust to tell us the truth, spoke words of practicality. 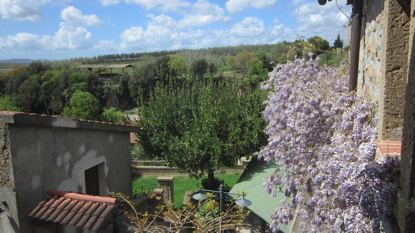 14.02    The ballroom meeting addressed practicalities, of how to move into and out of the Circle; holding the overview of the performance; and a reminder that our work is serious play, but not solemn. The faces on The Guitar Circle Of Europe, practising a return to the Circle, showed they had no intention of having a good time. This may have been the debut of Guitar Circle Face.

Immediately afterwards, an important meeting with Director Nunez; looking at the possibility of future courses in Eastern Europe, particularly Poland and Estonia. This marks an important shift in considering which facilities are acceptable. The GC Kitchen is an important part of any course, and we have for many years seen it as necessary that we run the kitchen ourselves, rather than leaving it to the facility to provide meals. Yet, in the early GC courses at Claymont in West Virginia, the kitchen was run by residents. Also, in Japan tasty food was provided for courses by the House.

So, my current view: a facility which is acceptable other than having no GC Kitchen, is acceptable. If the worst that happens is we have more time to practice the instrument, ourselves, and do House Work, that’s fine with me.

Also developments on The OCG website to include languages other than English.

Taken together, with the February 2013 course in Mexico, this suggests that the next stage of The Guitar Circle and The OCG current includes a moving-outwards into the world. 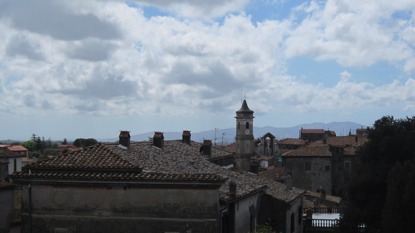 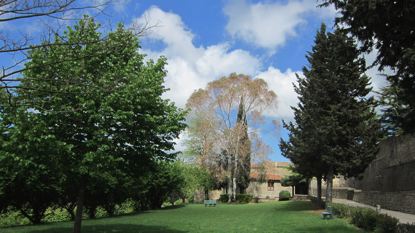 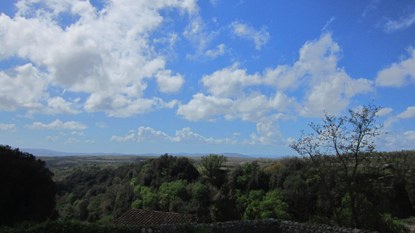 … with practicing, which I very much enjoyed. It centres me.

Quite excellent buffet supper at 17.00, even more tasty than most of the served meals. Guests have arrived and they will be put to work to support the performance. Departure call for the top of the steps at 19.00.

23.06    The OCG V left punctually at 19.00 with a recommendation that we keep our attention close while moving through the town; not that it would do anything to us, but that our attention might be attracted by and dispersed into the town. We arrived to a performance space very well prepared by the A Team.

Rehearsal of entrances and exits c. 19.45, and a general overview of what the evening's presentation might be. Picks were distributed personally around the Circle.

Although this is serious, serious play, I would like to have fun!

A better mistake is to play the wrong thing with enthusiasm than the right thing with temerity and fear.

At 21.00 the Announcers left to request consideration from the audience in respect of photography, recording and viddying: in Italian, French, Spanish, German, English, Dutch, Swedish, Polish and Russian. Mrs. Moscow is behind Mr. Poland… 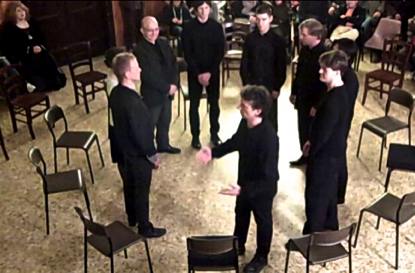 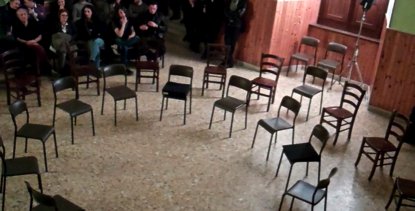 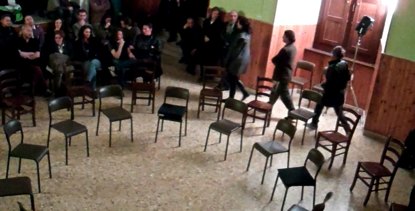 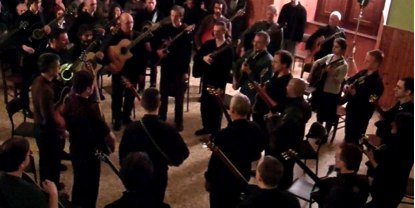 We collected ourselves, and the first improv began without words.

The Guitar Circle of Europe!

The Guitar Circle Of Europe!

The third improv: Orchestra Of Crafty Guitarists – when ready, please begin! This began with blowings into the soundhole.

Orchestra Of Crafty Guitarists! Please move to your positions for faster than light speed! These positions were adopted, then: When ready, please Whizz! Not bad.

When ready, please Whizz to the right at faster than the speed of light! 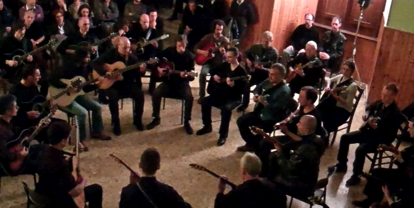 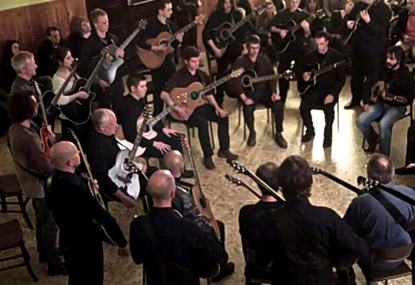 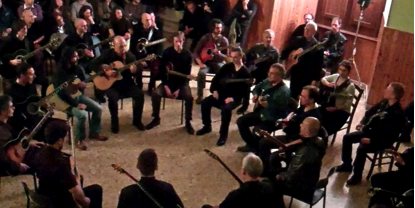 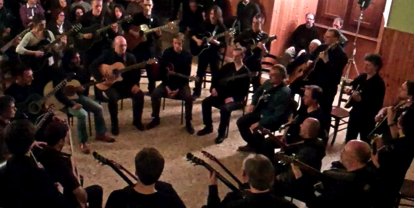 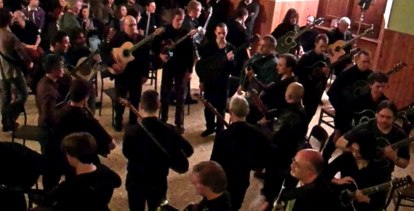 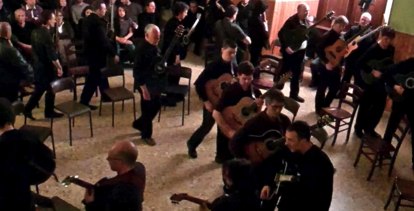 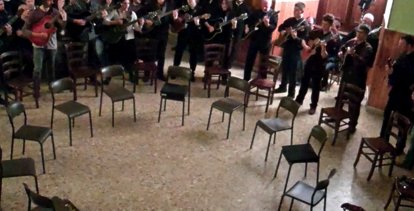 Leaving to considerable applause, The GCE returned for an encore: Schizoid Man… 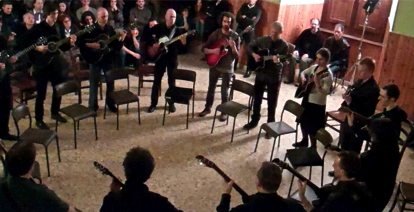 Even more applause and The Disciplinarians, a sub-group of The GCE, eventually returned to play Discipline, standing tight in the Inner Circle. This was superbly rendered. And then off… 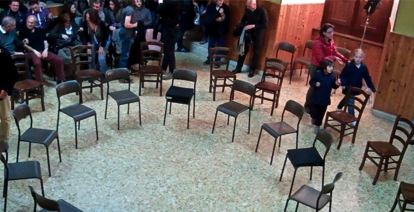 The GCE material included Red, Larks’ I & II and Waiting Man, a repertoire welcomed by certain members of the audience with some enthusiasm.

What became clear to me earlier today was the necessity for me to be part of The Orchestra, rather than its non-playing Director. So quite a lot of playing in the improvs; which I enjoyed.

Also to note: my attention was collected and closer to the performance team and myself than in all and any public performances I can recall, since the first in April 1958.

A speedy departure back to the House.

23.42    Excellent cheesecake. Very small but very tasty. Comments on the audience were invited.

Promoter Nunez recounted his adventure with the Photographer, who didn’t know that there was no photography. This surprised Hernan as the man was standing right next to Hernan throughout the long announcement in several languages requesting no photography.

And professional offers, too. Our promoter for the RF & The LCG tour of Italy (2007) was in the audience. That was one of the last tours of my professional life, partly undertaken to discover if it were still possible for me to play in Italy. It was not. The demands from a good promoter and his assistant, even where they went against terms clearly-agreed well beforehand, were regrettable. These mostly took the form of constant hustling for interviews and promotion, even where this has been agreed – not!

Promoters work with their clients and venues all the time, and do not wish to upset them. They may not wish to upset their artist, but better to upset the occasionally-visiting player than the regular clientele. So when the artist arrives in Italy, what matter you screw with them and ignore the agreements you have already made to lure them here? At the end of the tour, the artist will leave and your clients will not. So better screw the artist. I note, there are longer-term repercussions from this course of action which are rarely taken into account.

I enjoyed the evening: serious play, serious fun, no solemnity. But once again it provided an example of why it is impossible for me to return to the life of professional performance: fetishisation, violation and lies from within an audience coming together without the mediation of commerce, with no admission fee, and meeting in goodwill. Mostly. You only need one fool to piss in the village well. Alternatively expressed, you only need one prick in the balloon.

Two of the team are leaving before our breakfast meeting. Three guests are also leaving.