Down to morning sitting. On the street in mask and rubber gloves for brief shopping… 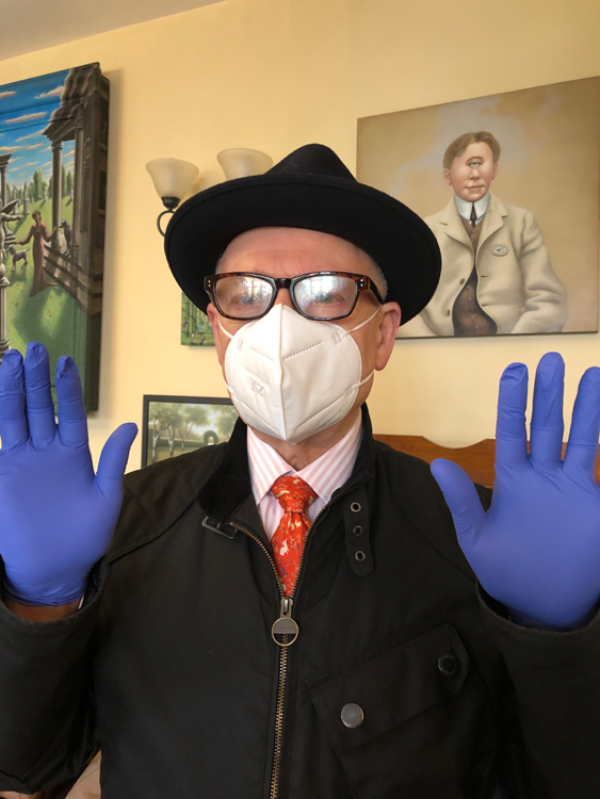 Should we need to go to the next level… 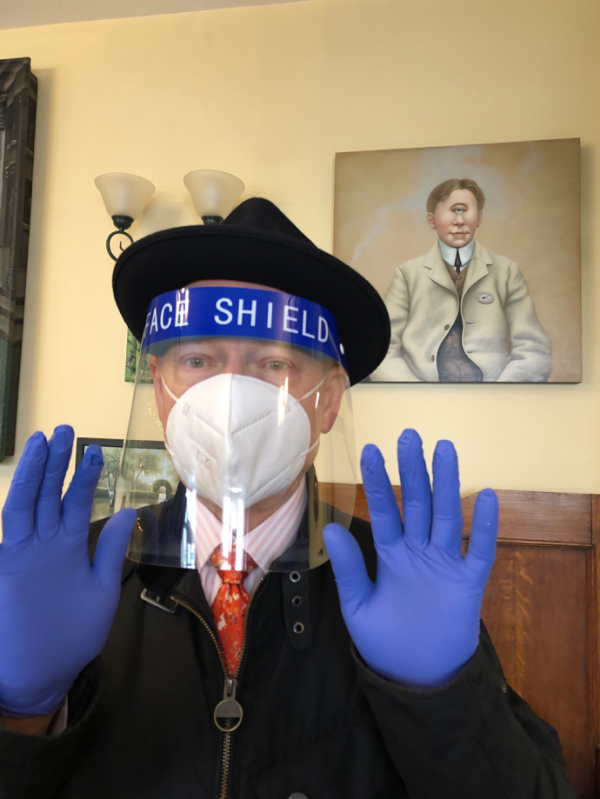 … which is the level that Crim Brother Bill Rieflin is currently employing in Seattle, we are informed.

Back to a little gentle reading, and to e-flurrying. On the Intro To The Guitar Circle site… https://robertfrippsguitarcircle.com/?fbclid=IwAR2dYhRZSYobL8jLV7I2z0EpdVh6rndZk59LllyjtECP9kYNfUMcGzQ9DC4…

Dear Friends and About-To-Be-Becoming Friends in the Guitar Circle,

In strange and uncertain times, even the most carefully planned and organised events are being unseated by the current world-arisings.

Nil desperandum! There are seven months before our GC Intro gets underway. I am anticipating that most, hopefully all, of us will be there, participants and staff.

Danny of Dreamcatcher and Hellboy Tom Redmond (who tells me what to do) invite us all to take care of ourselves, family and friends, and to reach out to those in need.

Music is needed in our suffering world more than ever. A vaccine would be good, and until then the medicine of music is a great way to go.

Many of you have a long way to travel, and your own raft of responsibilities and concerns to address. Thank you for your patience and understanding as we deal with the situations in front of us. We will get there. Updates will be provided as and when.

I look forward to rocking out with you all in Saratoga Springs this October.

15.22             The primary areas of my concern as a working player, and require my ongoing attention, I have characterized as the tetrad of the Music System…

Where is Robert’s place in this?

During the first part of my professional life, 1967 – 1991, engaging directly / personally with audients / audiences became increasingly difficult and unlikely (for various reasons). The widespread adoption of the internet, with online discussion groups, made a form of closer communication possible. Discipline (later Elephant Talk), hosted by Toby Howard, was the primary King Crimson group for bickering, bantering and haha-ing of the brou. My own responses and posts to this forum are the first entries in my folder Kicking The Wasps’ Nest.

I am saddened and let down by you. My wife and I have been fans of yours for years. She saw you on the "Discipline" tour and I saw you for the first time at the Royal Albert Hall performance with David Sylvian this month.

Well, actually, I didn't 'see' you. I 'heard' you - I think. You knew you weren't going to perform and be lit at the same time, and we didn't. I was simply confused. I didn't know where to look. Should I strain my eyes to see your brilliant craftsmanship?

We have followed your career through The Roches, King Crimson, League of Crafty Guitarists, etc. We know your sound. We paid to 'see' and 'hear' you.

Sure, I could have let go of my ideas or pictures of what a concert is supposed to be like. I've done it before. However, I wanted to 'see' you playing guitar.

The bottom line for me is that you didn't take responsibility for your actions. You, nor David Sylvian, communicated to us about this 'choice' you made to play in the dark. Since David was doing all the singing, maybe he could have said, "Excuse me, ladies and gentlemen, Robert will not be spotted with light tonight because he finds it easier to perform in a dimly lit situation and apologises for not being fully lit. I imagine you may have expected to see him clearly because he is co-billed as the main attraction. He believes that this choice of not being lit will ultimately provide him with the space to give his best performance and thus give you your money's worth." Truthfully, I think it should have been you saying this. If you did this, all would be forgiven – I promise you.

At first, we spent most of our time thinking there was a technical problem. Then we got the point. Then we battled between straining to see you play your leads and, at the same time, focus on the distraction of the rhythm section who were strongly lit in white light. As a trained concert listener and viewer, I think the eyes and ears go to who is playing the lead if no one is singing. Your not being lit knocked us off balance and detracted from the whole purpose of the show which, in my mind, is to perform to your maximum potential.

If that was your best effort, then I think you are a fraud or simply one who is not an aware person. Not being lit, is a big 'fuck-you' to the audience when you know perfectly well that people would be disappointed by not seeing you.  It is a tease and a manipulation. Maybe one day you will get the attention off yourself. Getting the attention off yourself is a type of selflessness which is greatly appreciated by the listener/viewer.

A man once told me, "When you get to the point where you know you are no better and no worse than any other being who has ever lived, you will have reached your pinnacle as an artist." Until you reach that point, Robert, I feel sorry for you and wish you peace of mind in the quiet, unconscious, daily living 'hell' that you are keeping yourself in.

You can please send me £21 to pay me back for the show. You didn't earn it, sorry. I am open to a reply from you.

For your information, I will not stop buying your recordings. I am not that extreme, however, I have talked others who attended the show and have made the decision to not support you any more with CD purchases or going to your live performances.

Introduction To The Guitar Circle 2020