Broad accents of the local kind, those of our landlord, came through the office wall at 08.35.

The constituent parts of the Solar Voyager have just arrived & been loaded in through the front door, returning from Estonia.

Reading in Shakespeare: The Biography by Peter Ackroyd (Chatto & Windus 2006) this, quoting the German critic AW Schlegel…on Titus Andronicus: Genius is in a certain sense infallible, and has nothing to learn; but art is to be learned, and must be acquired by practice and experience.

I’d put this differently, and differentiate between craft & art…

Craft is to be learned, and is acquired by practising & experience. The practice of artistry begins with abandoning what has been learnt, assuming innocence within the context of experience. If genius is present, the creative impulse acts upon & through training & experience, held lightly, a vehicle for the creative leap.

10.05 The only online review I have read of the Estonian Churchscapes (link posted by Mr. Picken to the Guestbook on August 30, 2006)…

Robin Gurney said,
ON AUGUST 23RD, 2006 AT 7:39 AM
Yeah, well, we went and frankly… it sucked. How can one man with so much talent produce such a boring show ? oi oi oi. Obviously my expectations were way too high. Last time I saw him he was great. Weird.

Not weird at all: this is in the nature of expectation. It was a joy for me to discover that the Estonian audiences (mostly) had no direct experience of RF. So, the audiences (of all ages) were relatively expectation-lite.

And the show: this was not a “show”. If I were asked to conceive the least interesting visual event that might be shown in public, Fripp & The Solar Voyager would leap immediately to mind & in first place. Several audients have suggested to me that their Soundscapes/Churchscapes listening was more satisfying with eyes closed.

Nor was this primarily even a Musical Event. This was not the aim. A better approach to Churchscapes is to understand them as a personal thanksgiving service, a reflection of faith & music of devotional intent, rather than Someone Doing Something to a passive audient who Expects Something. Churchscapes (both in England & Estonia) were carefully defined & placed outside commercial culture, conventional musical venues, and inside worshipping-spaces of local communities. And I accept that some churches open their doors to Artistic Events. One pastor remarked to me, after a performance, that his church provided space for various musical events, not all of them were quite suitable for the church but Churchscapes were.

If I were attending a performance, by any one man with so much talent and the last time I saw him he was great, and I didn’t get what he was doing, personally, I’d figure the responsibility was mine to get it and make the effort. And maybe the performance was boring and sucked. In its context, in service to the aim of the performance & what Churchscapes are, none of this has any relevance whatsoever. The problem is solved because it’s not the right problem.

I note also that Estonian culture is not as overwhelmingly Americanised as Western Europe. This is not at all a criticism of American music – jazz, blues, rock et al – the musical juice of the 20th. Century that has fuelled & driven my life as a player; but a reflection of commercial culture & attendant attitudes that follow where American popular culture leads.

Popular culture easily slides towards mass culture; this is because commerce puts out the grease & provides a kick. When we arrived & were driving into Tallinn from the airport, we were told that all the advertising billboards in Estonia have been bought up by Clear Channel. But, for now, Estonian ears are not quite those of Westerners. Music is not yet a commodity, a product to be consumed.

12.45  Here, in DGM SoundWorld II, we are working on Estonian Churchscapes. David & Alex are both getting their hands in I… 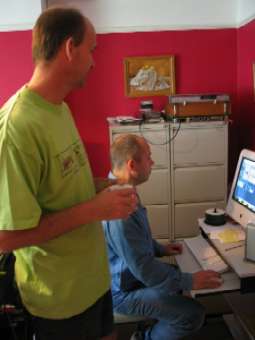 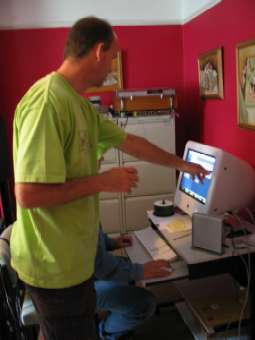 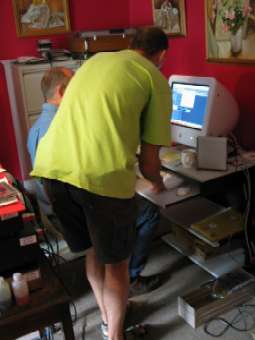 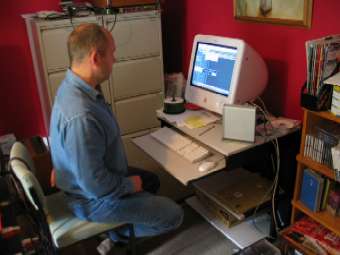 Beatles court showdown for EMI By Charlotte Moore
Times Online August 30, 2006
The world’s third-largest music group, EMI, will have to go to court to face accusations by the Beatles that the company pocketed millions of pounds of excess royalties, said a judge in New York.

I can’t comment authoritatively on whether The Beatles’ charges are true. I am able to declare authoritatively that in 2003 EMI settled out-of-court for a huge underpayment (in KC terms) of royalties; and that, as of today, EMI continue to be unable to return the masters of the entire KC catalogue from 1969-1999 and nearly all of the artwork, which they have lost. How do you manage to lose an entire catalogue?

What grates is not that mistakes were made, but the attitude that has accompanied them. Firstly, unless it had been made clear that I would go to court, the underpaid royalties would most likely have remained unpaid/underpaid. Secondly, a little genuine acknowledgement of error is appropriate when you’ve fucked up big time and lost an entire catalogue of sound & vision.

Well. Another day in the music industry.

15.40 Back in Soundworld II with Alex continuing with Estonian Churchscapes while stuff continues to surround & encroach.

17.08  The encore from Tallinn is now drifting slowly away.

20.23  Telephone conversations with Work Wrinkley Vivien, my Wife & the Sistery Person. A quiet evening with the computer.