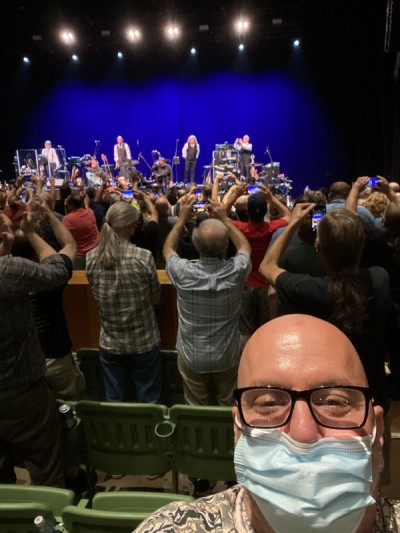 Written by Kevin Köknar
Orchestral Projection
Long time listener, first time live. We were eighth row. It was a phenomenally tight show that transported me within the sound and light.

Written by Peter Anderson
Philadelphia Invokes Indefatigable Sonic Tempest
On a mild late summer evening, following historic rainfall and unknown floods of murky water, King Crimson formed at the Mann Center and summoned through their breath and bodies vibrations that are akin to galaxies colliding in a billions year long dance, usually only available to the Gods. The sound was perfect. Sitting on the lawn, in an equilateral triangle with the twin PA-system speakers, every musician was discernable and new levels of awareness fired in our neural networks. The play of Tony was clearer than I have ever heard at any venue in the city, and I have been witness to KC several times in far more magisterial spaces. Every motion of all the players was as clear as newly blown glass. The music itself has evolved significantly in the few years I have been attending Live Crimson events. The music is now is so a part of KC that play can occur with the greatest degree of flow and joy I have yet seen. Those in attendance were young and teeming with the fiery energy being brought forth into this pocket of the universe. Being played by the band as if another instrument. The hardest, most cutting pieces from each decade of Crims was unleashed in a lightning storm of sound. The catharsis of this show was deep, as if an industrial pump emptied out a befouled well of isolation, fear, confusion, and malaise. As the flood water in Philadelphia has receded and cleared, King Crimson has brought the wind and sun that has cleared the flood waters of my soul. TL/DR: 10/10 show. Please release this one, it was special for us. Sounded great. Loved it.