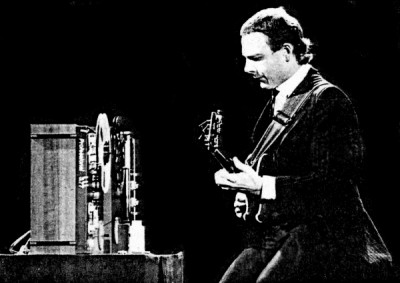 Having spent time in London the previous month recording I Advance Masked with Andy Summers, Fripp hopped back over the Atlantic to perform a fundraiser for the Claymont Society. This concert, containing two houses, would be only one of two Frippertronics performed that year - the other being at the first-ever WOMAD festival the following month.
Having found a reel of loops in the DGM archive, engineer Alex Mundy set about doing a little detective work comparing the loops with a bootleg recording from one of the shows from 13th June 1982. “I was able to confirm from listening to both that the bootleg I’d been sent was from the first of two performances.” Once again Alex has performed heroic acts of sonic endeavor, in reuniting Fripp’s solos from the bootleg with the pristine loops. You’ll hear the tumbling lines from Easter Sunday on Loop III And Solo. Alex has added the loops from the second performance of the evening to this download. The brittle clamour of Loop I from the second house is especially gripping as Fripp advances broad investigative lines in several directions. There’s no soloing but the nine minutes stand up in their own right. “There were three more loops on the reel I found which I believe are from the WOMAD event at Shepton Mallet in July.” These will be processed and made available at a later date. 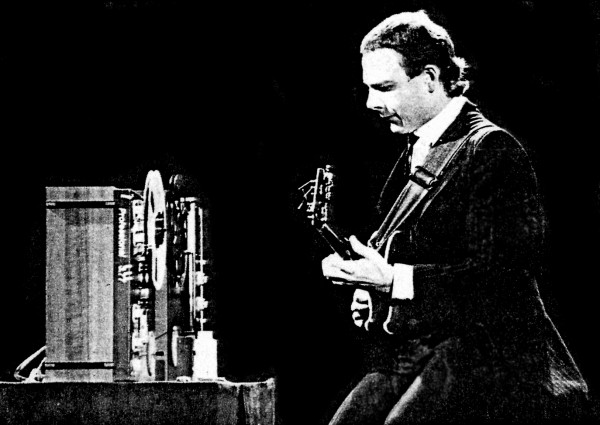 Loop I And Solo

Having spent time in London the previous month recording I Advance Masked with Andy Summers, Fripp hopped back over the Atlantic to perform a fundraiser for the Claymont Society. This concert, containing two houses, would be only one of two Frippertronics performed that year - the other being at the first-ever WOMAD festival the following month. H... 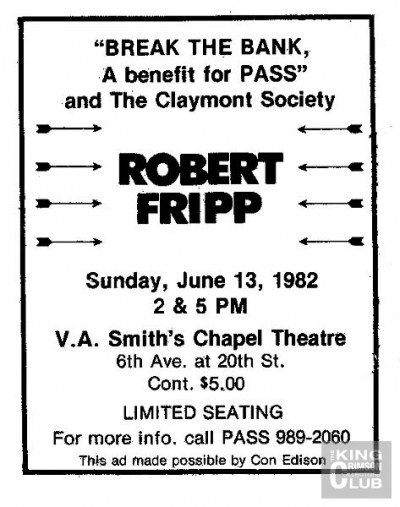 Written by Emanuel Maris
Not a review, but a funny memory
Again, as with virtually every performance involving RF solo or with group in NYC since 1973, I was present. [Yes, even at unannounced guestings like the Roches show 1982 at Town Hall]. As the line waiting for the early show was beset by a thunderstorm, we were let in early, and witnessed Robert, with guitar unplugged, sitting on his stool playing runs, every so often stopping to file his fingertips. At one point, such patient silent viewing was too much for one member of the audience, who broke the monastic silence with a yell of ’HEY, BOBBY!’ A few moments later, Fripp was finished with his pre-performace preparation, unstrapped and laid his guitar down, and walked off toward our right at a measured pace, suddenly interrupting his measured pace to leap up in the air facing us, wildly waving his arms and screeching ’HEY BOBBY!’, landing back on his feet still facing and walking slowly to our right, like it never happened. The rest of us lost it! Can you say Cosmic Joker?

Written by Eric Gislason
Chills and Thrills
&nbsp; Another masterful match-up of master tapes and surreptitiously stolen solos. Thanks again to Mr. Fripp and the good people at DGM for making these recordings available. &nbsp; I am very much looking forward to the WOMAD performance. I have heard stories of the event over the years, but never expected that a recording of it would surface. &nbsp;A special thanks to Alex Mundy for scouring the murky, cavernous DGM archives. Your efforts have brought me great joy. 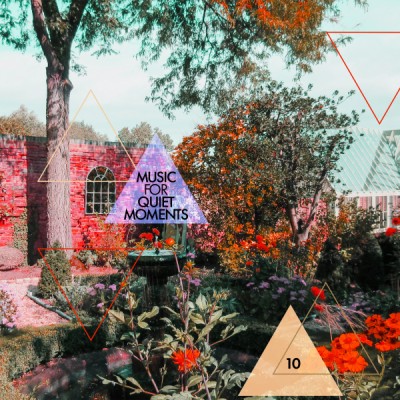 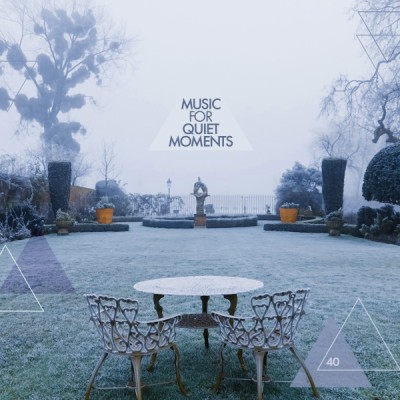 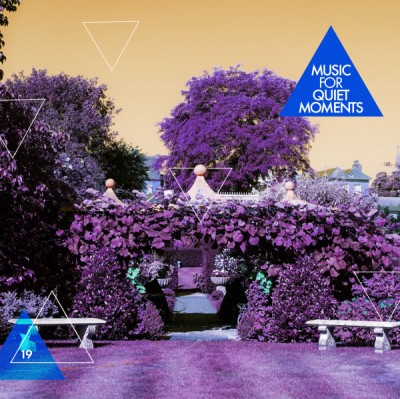 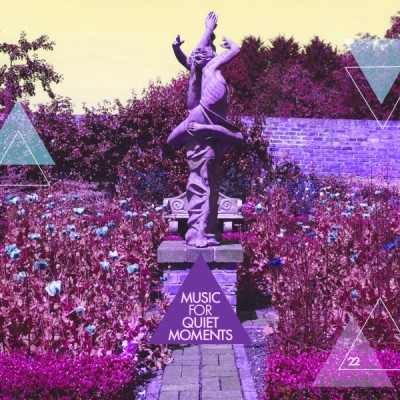