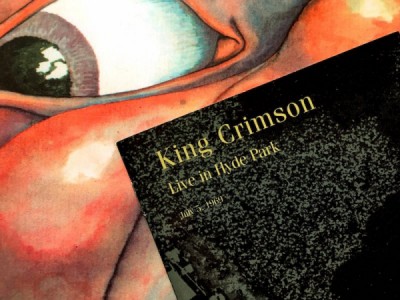 52 years ago today King Crimson wowed the 650,000 strong crowd in London's Hyde Park. Supporting The Rolling Stones, the gig played a pivotal role in establishing Crimso at an early point in their career. 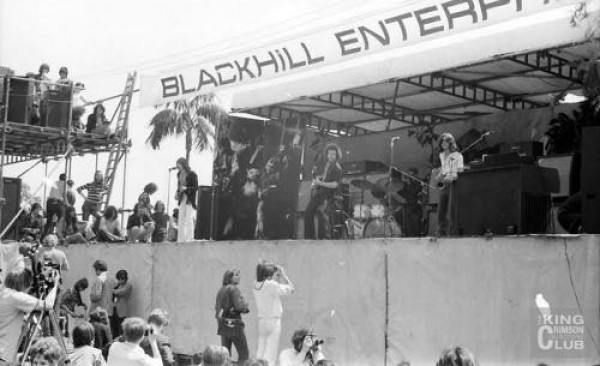 When Crimson took to the stage they restricted themselves to a truncated set consisting of 21st Century Schizoid Man, In The Court Of The Crimson King, Get Thy Bearings, Epitaph, Mantra, Travel Weary Capricorn and Mars.  Dik Fraser recalls that during the opening number a large framed photograph of Brian Jones fell, almost catching Greg Lake. The bass player shrugged off the mishap, but several people backstage thought it was some kind of augury or supernatural manifestation. 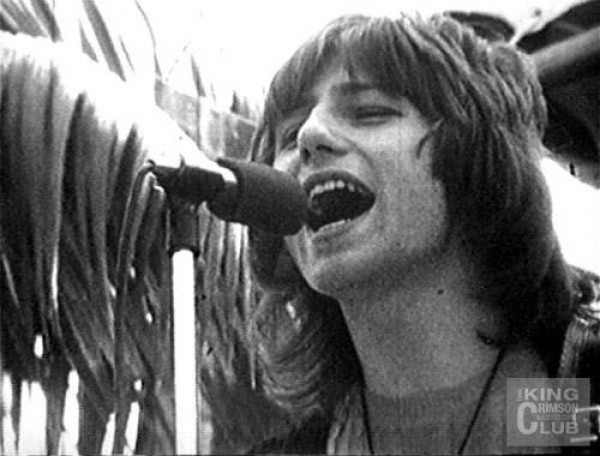 It was a good day for Crimson, however. The newest member of the road crew, Richard Vickers (better known as Vick), recalled in his memoir of that period: "The high point of that gig was the whole audience rising to their feet as one and cheering Ian McDonald solo during ‘Schizoid’ — I remember the hairs on the back of my spine rising in unison as the roar from this huge crowd went up."

In the crowd stood Jamie Muir. Having only recently moved down from Edinburgh, the future Crimson percussionist was then playing with free improvisers such as John Stevens and Derek Bailey. He was impressed by the force Crimson created. "What was incredible was that they just exploded onto the scene fully matured. Most bands come along and then develop but Crimson just came on and exploded with this very adult, intelligent, cutting-edge music. It was just this whole package that went wallop!"

Fourteen-year-old Trevor Lever, attending his first concert, found Crimson perplexing. "At one point I thought an orchestra was playing but through my binoculars saw only four blokes on the stage. ’Where’s the orchestra?’ I asked a mate. ’Dunno,’ was the informed reply. ’Who is this playing?’ I said to no one in particular. ’King something,’ I was told. I made a mental note to check this band out at a later stage." It was the start of a love affair with Crimson which Lever — who has seen shows by every incarnation of the band since — continues to this day. 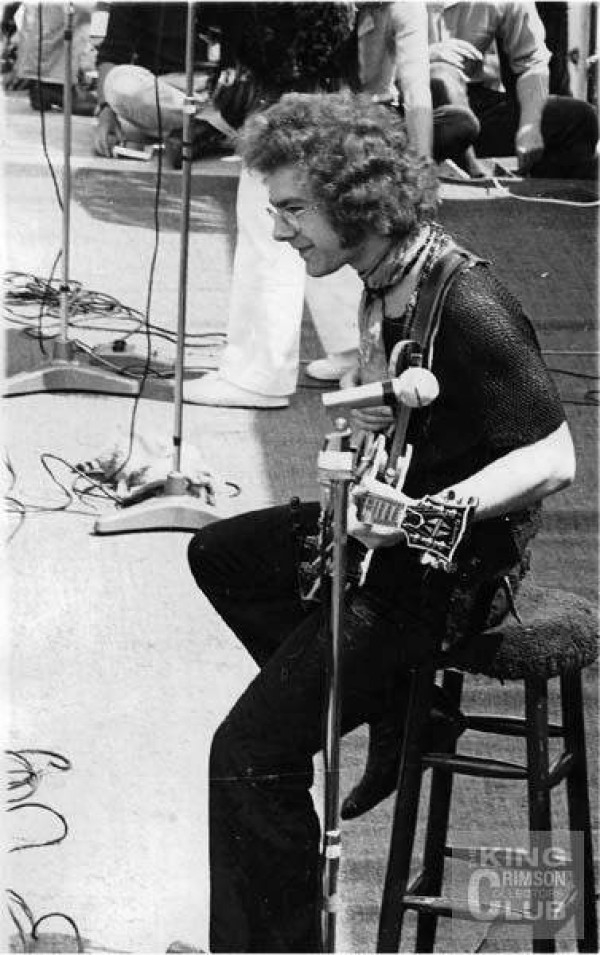 Crimson finished as usual with “Mars” (complete with an air raid siren being cranked up from underneath the stage by Enthoven and Fraser). Enthoven, celebrating his 25th birthday that day, regards this as the defining moment of the launch of King Crimson. McDonald agrees that it was the point at which Crimson arrived, but adds: "It would sound blasé to say that this was just another gig for us, though in a sense it was; we were having a great time discovering and enjoying our music, but we were also experienced enough individually not to be too greatly affected by any particular venue." 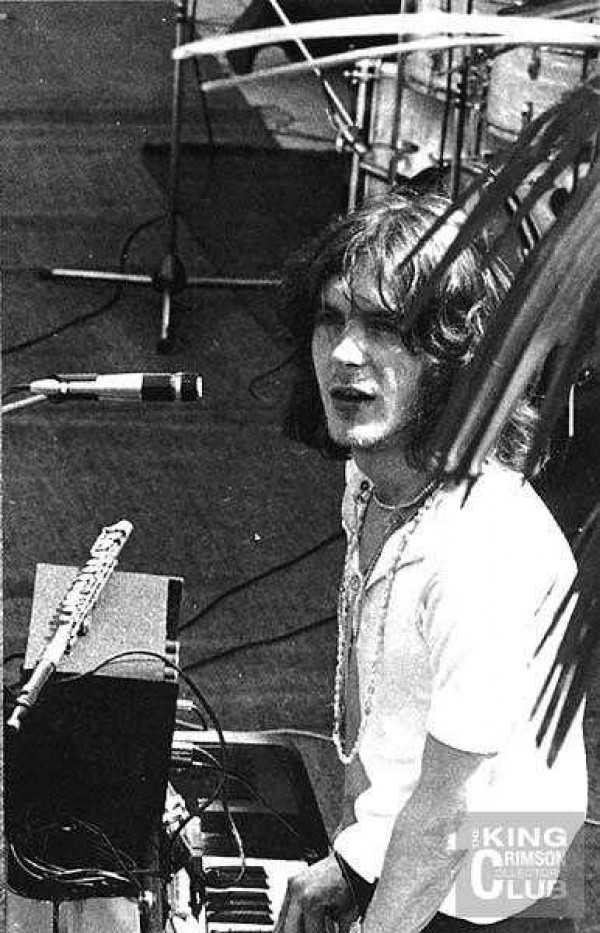 Sinfield was less than impressed with the set that day, feeling that the band was below par.  Lake disagrees: "It was the first open-air gig that Crimson played and to that extent it wasn’t as sonically controlled as the ones indoors. Pete didn’t have his lights to play with but it was an extraordinary show."  In his diary, Fripp noted: "Standing ovation. Mammoth success, of importance which will take time to appreciate. We’ll look back to see this day in years to come and fully realise its significance."Lake observes: "I think that even if that Hyde Park thing hadn’t have happened, I don’t think it would have affected the popularity of King Crimson.  The band had spread like wildfire." Certainly the next night when Crimson played their regular slot at The Marquee, the club was packed. Sinfield regards that gig as infinitely superior to Hyde Park. "The Marquee the next night.  NOW that was a humdinger!  Oh yes indeedy!"  McDonald in his diary notes that the band certainly picked up a few new admirers.  "Went to the Marquee. Did gig. Came back with nine chicks (!)"Crimson continued to surf a wave of critical approval.  Richard Gott in The Guardian’s review of Hyde Park asserted: "Most of the music, with the exception of a sensational group called King Crimson, was indifferent." And B.P. Fallon in that week’s Melody Maker raved: "King Crimson are going to be giants. Perhaps I’m wrong. Perhaps. Give it a year and we’ll know. No dammit. Six months will do. Really..."  A more considered verdict was delivered by Richard Gilbert in The Listener.  "King Crimson played again at the Rolling Stones concert in Hyde Park and their confidence in careering from the gritty to the lyrical won them a massive and deserved ovation... if their records can match their live performances they will survive all the bandwagon leaping."
You can download the audience recording of the day here... 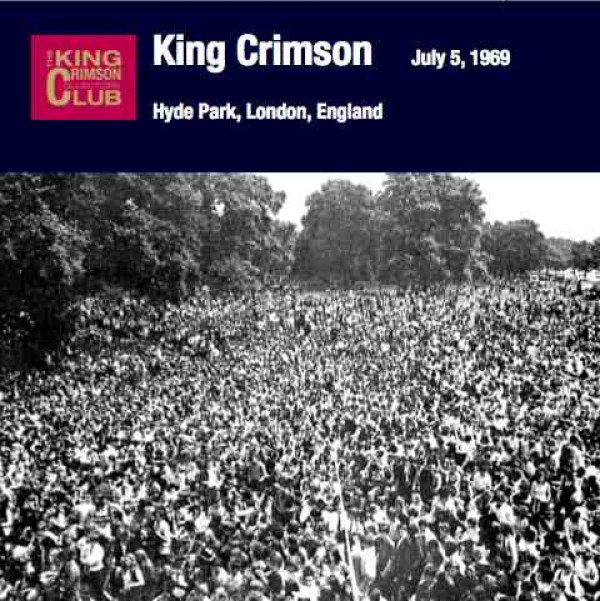 For years it was assumed that there was no footage of Crimson other than a brief glimpse of an off-stage Fripp peering at Mick Jagger through the potted plants on the Stones In The Park DVD. Minutes later, Fripp and other KC members were unceremoniously thrown out of the backstage area. 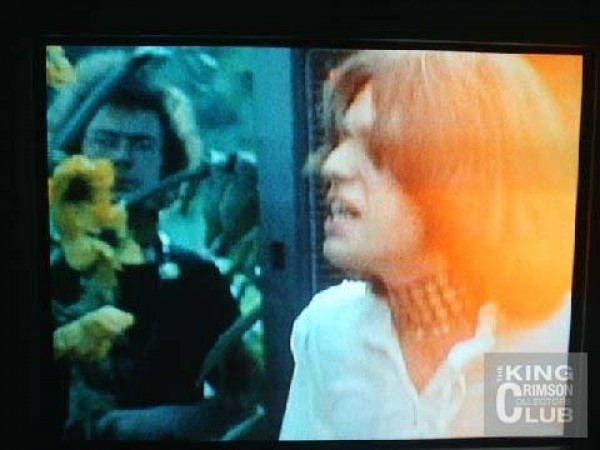