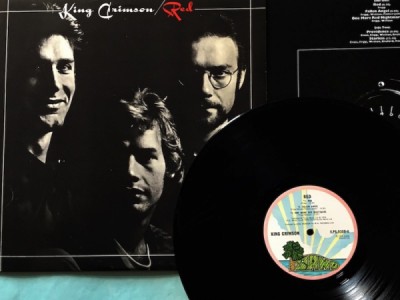 On this day 47 years ago, Red, the final King Crimson studio album of the 1970s was released. Although the band famously 'ceased to exist' by the time the album hit the shops, it has become one of the most widely acclaimed and iconic releases in King Crimson's extensive back catalogue.

Although the album's anthemic closer, Starless, had been trailed on tour earlier in the year, all of the other studio cuts were brand new compositions worked out during what proved to be a sometimes difficult recording session at London's Olympic Studios. The title track didn't receive its live premier until 1981 when it was included in the setlist of the new incarnation of the band.

In more recent more times, all of the tracks, save the live improvisation, Providence, have been reimagined by the current version of King Crimson with One More Red Nightmare and Fallen Angel joining Starless and the title track on the setlist. 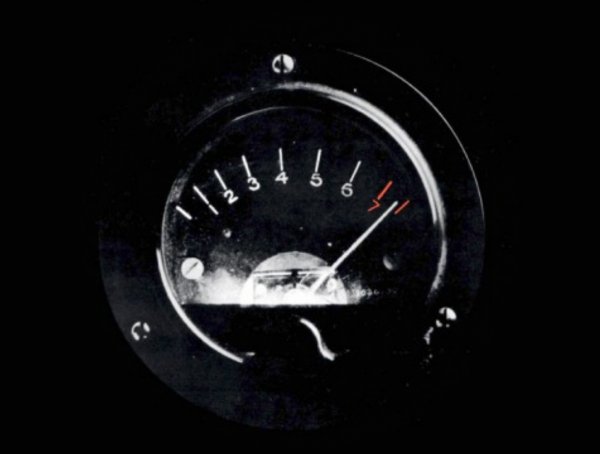 Perhaps more than any other King Crimson album, Red captures the sense of change and expectation that permeated the air as Bill Bruford, Robert Fripp and John Wetton entered Olympic Studios on 8th July 1974.

The tangible sense of momentum within both band and management had been reinforced in part by the triumphant culmination to months of touring at New York’s Central Park just seven days earlier. Fripp noted that this was “the first gig since the 1969 Crimson where the bottom of my spine registered ‘out of this world‘ to the same degree”.

Most in the Crimson camp sensed they were on the edge of breaking into the big league of commercial popularity following their return to the UK. Yet alongside such optimism, doubt and uncertainty were present especially on Fripp’s part, then actively considering taking a sabbatical from the band in order to follow up the spiritual awakening experienced after reading the work of JG Bennett.

Unaware of his inner turmoil, Bruford and Wetton had to deal head-on with its fall-out as Fripp informed them he would be withholding his opinion during the recording sessions.

Much like the portraits used on the cover (immediately christened by the band themselves, “the good, the bad and the ugly”), it was against this backdrop of shadow and light that the recording of the 7th King Crimson studio album took place. 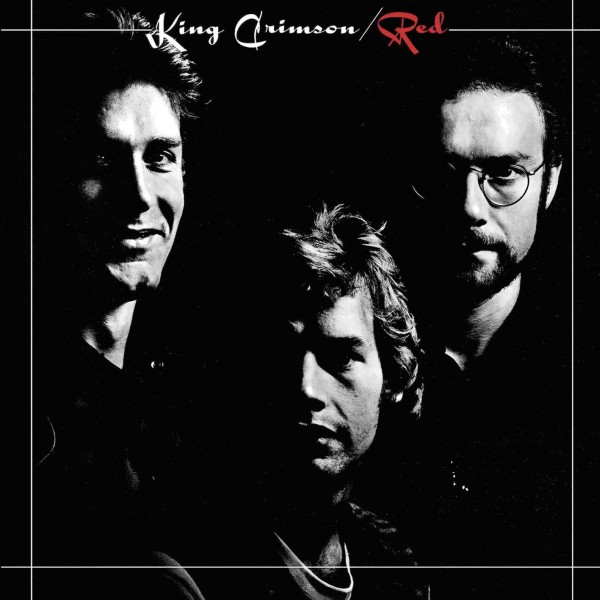 Red was the first piece the trio tackled. Although elements of it had surfaced in rehearsals in May, as well as sound checks and during live improvisations, this was the first time the bulldozing piece had been formally laid out.

Although long-acknowledged as a crucial part of the Crimson canon, Red’s appearance on the album was by no means certain with Bruford initially unconvinced about its see-saw melody. “I said fine, we don't have to use it” recalls Fripp “John urged for its inclusion. Bill said something along the lines of 'I don't get it, but if you both say it's good I believe you’”.

The brooding cello section on Red marked the first appearance since 1971 of guest players on a Crimson album. Others included oboist Robin Miller and cornet player, Mark Charig (who’d last appeared on Islands) providing distinctive contributions to Fallen Angel, a track built in part from an unused Wetton ballad called Woman and a Fripp riff first used by the LTIA quintet in October 1972.

Perhaps the most significant guest however was KC founding member, Ian McDonald. Wetton in particular was keen to see join him the line-up on a permanent basis: “My thinking was that Ian in the band would have possibly pushed us into Pink Floyd territory, out of the cult status that we were just beginning to move out of."

McDonald’s first of two appearances is on One More Red Nightmare whose strident theme had been developed from live improvisations. The track is of course notable for its exhilarating cymbal breaks. “They’ve become a bit legendary in part because of the fabulous trashy 20-inch Zilko cymbal I found in the rehearsal room rubbish bin” recalls Bruford. “Much of my contribution was inspired by Billy Cobham, who was hugely influential at the time.”

The inclusion of the live improvisation, Providence, continued a practice begun on the previous album, Starless and Bible Black, and one born from necessity. “We were always short of material. We resorted to live improvisations which were more or less effectively disguised as such by avoiding or removing any applause,” explains Bruford.

The epic track Starless had been part of the live set since mid-March. Now honed and refined, it receives its definitive recording here, touching upon all aspects of Crimson’s history along the way. Hair-raising contributions from guests Mel Collins, Robin Miller, and Ian McDonald, as well as uncredited cello and double bass players whose dramatic appearance at the climax of the track, all adds to its undeniable magisterial power.

“We always knew that Red should start the album and Starless should finish it. It makes the album sequence like a live show,” observes Wetton. If Starless was partly an elegy to Crimson’s past, saluting the grandeur that had made such an impression in 1969, then Red was definitely a prediction of things to come.

The album’s legacy continues to be felt long after Fripp’s announcement in September 1974 that the band had “ceased to exist”. A proto-heavy metal sound, it is also frequently cited as an influence on musicians as diverse Henry Rollins, Curt Cobain, and Tool. In 2000 The Mojo Collection assessed Red as “that rarest of records, the sound of a line-up quitting while ahead” seems especially apt.

Red was recently placed at 15 in Rolling Stone magazine's 50 Greatest Prog Rock Albums Of All Time feature (read it here) and it has been the subject of numerous retrospective assessments from a variety of quarters including The Quietus, Pitchfork and Sputnik, as well as various features on the making of the album.

THE PREVIOUS two albums by this final King Crimson lineup have never been as hysterically self-conscious in their obvious adventurousness as the first four studio records that came out under the band's name.

In fact, listening to certain parts of each of those early albums can frequently provoke nothing as crassly simple as severe brain damage but a rather more civilised basic aural pain.

In general, it's a pretty tidy set of neuroses, instability and insecurity — both musical and personal — that cuts a jagged edged swathe across the eight sides. The psychic melodramas do, though, have the saving grace of being carried out with an appropriate sense of artistic folly.

Indeed when juxtaposed against the histrionics of those records Larks Tongues In Aspic, Starless And Bible Black and, now, Red would seem to have been recorded in a state of almost Calvinistic general togetherness — or, if you prefer, what used to be known at school as "maturity" — and even if Larks Tongues does marginally fail to cut it due to a rather too noticeable excess of zeal then Starless, which is minus both Jamie Muir and His Percussive Pistacchio Nuts and the perfectionist production of the former — though not credited on the sleeve as such the whole of side two was cut live — comes up with a more consistent and relaxed amount of highs than any of its predecessors.

There's one other little plus that Starless has going for it...uh...it...well, it nearly swings.

And so to Red. No two ways about it, and putting aside for the moment any little thoughts we may have about its being The Final Work this outfit — now reduced to the basic three-piece of Robert Fripp, John Wetton on bass and vocals, and Bill Bruford on drums (sorry, percussives) — were really starting to whizz those thought patterns around amongst themselves.

Side One is actually rather a funky, even heavy, piece with 'Fallen Angel' and 'One More Red Nightmare' restating the weighty note progression emphasised almost to the point of a calculated ennui on 'Red', the first track.

'Fallen Angel' moves things on with some of your old mellifluous free-flowing melody ending up as a variant on a basic pop track with a surreal middle eight that has some most impressive reed honking from Mel Collins. Robert Palmer-James' lyrics are virtually indistinguishable, which on past evidence is most certainly in the record's favour, whilst Wetton's voice, doable or triple tracked on the chorus fines has the chore of both sounding like Greg Lake and being able to highlight the inadequacies of any similar ELP technological ballad.

'One More Red Nightmare' puts the rather curious counterbalancing of the first two tracks into a comprehensible perspective as it grips together the main themes of each title with some hot ice howling lead percussion from Bruford that does just now and then veer dangerously towards intellectual doodling.

'Providence', which opens the second side, features "guest" violinist David Cross on a schizoid quasi Prokofiev piece of impressionism which, when joined by the bass and Bruford, displays at first the sense of spacing and notation which was particularly evident on Larks Tongues but which ultimately dissolves as it's hurled into a rather early model King Crimson piece of mellotron madness.

The truly enigmatic side of Crimson gets really well held up to the light on the twelve-minute final track, Starless, with the baroque intensity — and extremity — of Fripp's Mancini-like mellotron strings that carry a hint of the mood of side two of Lizard until the scorching guitar, bass and jangling percussion work up and along several note and chord structures with each instrument underlining the other until a pattern is shaped like a continuous loop of sound restating the album's themes.

It's really quite curious and should, I suppose, be put down to some psychic state evolving from the demise of the band but Red is truly the first Crimson album that I can find myself listening to over and over again.

Would it be that same psychic state that makes me believe it's the best album ever made under the name of King Crimson?