DIGGING GILES, GILES & FRIPP
Posted by Sid Smith on Nov 30, 2005 - This post is archived and may no longer be relevant

It was 37 years ago today that Colour Me Pop featuring GG&F (with Ian McDonald) was broadcast on BBC 2.

Though this thirty minute programme was junked from the BBC archives many years ago, we know the set list included Why Don’t You Just Drop In, Make It Today She Is Loaded, Erudite Eyes, Tremelo Study, Thursday Morning, Elephant Song and the classic tale of illicit affairs in the suburbs, Digging My Lawn. 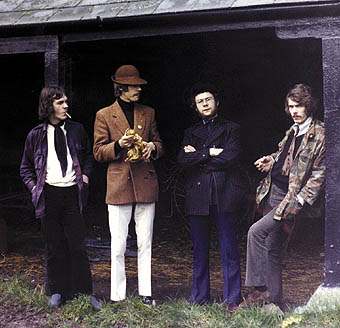 Whilst the video is lost to time the audio track for the complete show was provided and consequently preserved for posterity by Peter Giles.

These tracks, long with a few others from his audio-scrapbook eventually saw the light of day in 2001 as The Brondesbury Tapes. Of particular interest is the Fripp composed Passages Of Time sung by Judy Dyble. The middle eight section was the basis for Peace – A Theme,  later surfacing on Crimso’s In The Wake Of Posiedon..

For any Crimhead looking to trace the lineage from GG&F to KC, then Brondesbury provides a more convincing transition than the original Cheerful Insanity Of GG&F album.

On a minor trivia footnote, when the 21st Century Schizoid Band formed and were considering which Crimson material they should cover, Peter’s suggestion of Digging My Lawn was inexplicably declined.