ANDREW KEELING'S DESERT ISLAND CRIM
Posted by Sid Smith on Jun 10, 2006 - This post is archived and may no longer be relevant

Andrew Keeling's connections with King Crimson go back to when he wrote to Fripp at the age of 15 asking if he could join the band.

He was surprised to receive a reply from the guitarist and an offer to write an arrangement of "Lady Of The Dancing Water". "Robert had quickly written it in pencil (the melody line plus chords) and invited me to do an arrangement of it. I did so and sent it to him. When Lizard came out and I heard what Robert had done with Peter Sinfield's words I learnt a great deal about not what to do with an arrangement: Robert's original was a wonderful indication of control and simplicity done so as to heighten words. Mine was an overblown monster of a thing! I think Robert set my future in motion by inviting me to arrange something."

Of course, Andrew will be known to many visitors to DGMLive.  The composer kept a diary on the old DGM site and produced two guides to King Crimson's Music; In The Wake Of Poseidon and Larks' Tongues In Aspic with another title dealing with the debut album being prepared.

His haunting track Meditatio was one of two by him featured on the DGM-released Present Moment album, Hidden Streams by Opus 20 and in 2000, he released his own album, Quickening The Dead for the Riverrun label.

Along with Bert Lams, Keeling has also scored Robert Fripp's Soundscapes for orchestra and in 2005 he released Reclaiming Eros for the Burning Shed label (see my review on my blog).  Burning Shed will also be releasing an album of solo piano music by Keeling this year.

He also maintains a regular diary over at Krimson News which chronicles his twin passions of hill walking and writing music .  Andrew's website also contains many resources and articles of interest to Crimheads.

So without further ado we have Andrew Keeling's Top Ten KC – and in common with other guests in this spot, he’s had a bit of difficulty in whittling things down to just ten tracks. 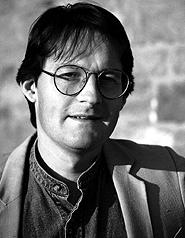 It's impossible to single-out individual songs for a KC Top 10. It's always been my belief that the songs are parts of a much greater whole. So, a top 10 albums within and without King Crimson is, for me, a more practicable way forward than just individual songs. It also strikes me that this list is likely to be chronological.

1) In the Court of the Crimson King

I first heard this on December 9th 1969 after a school concert. It stunned me to the point of having to listen to it twice in a row. From this point onwards my life changed. From the opening 'noise' of Schizoid Man to the closing bars of the title-track this is a magical album. This album came from somewhere else. It encapsulates the entire ethos of musico-archetypal otherness, going well beyond the counter-culture of the late 1960's. It's of no wonder that the power of this rendered KC immobile. It was a lightning-bolt to all of us. It was also the structural prototype for most of the subsequent KC albums.

2) In the Wake of Poseidon

I bought this on its release-date, summer 1970. Pictures of a City was stunning then and remains so to this day. The problem is that, often, popular music comes with ready-made nostalgia. It is often impossible to separate our primary experience of the music with the actual music content itself. When I learnt the acoustic guitar part and transcribed the music of the title-track for my Musical Guide on the album, I realised why this music has stood up. Cadence and Cascade is sensational; Catfood in a league of its own. Mick Farren once said, I believe, that KC weren't rock 'n roll. He was right! They were jazz! And the album concept? Clearly KC were in a league of their own.

I bought this album on its release date in December 1970. How on earth did Fripp and Sinfield manage to a) write Poseidon b) go on to create this album in so short a time? Cirkus is one the strongest pieces/songs of the period. Lady of the Dancing Water? What can one say? This illustrated that Fripp and Sinfield were to the 1970's what Lennon/McCartney were to the 1960's.

4) Islands
The title track is one of the most beautiful things I have ever heard. The lucid structural placing of keyboards is masterful: piano to harmonium to mellotron and back to harmonium. The mellotron ritornello a masterstroke.

Should this be placed as No.2? I've always felt that the mellotron ritornello of Islands owes a huge amount to the flying section of Birdman, and I believe that Birdman may well have been the b-side to the projected KC album #2. McD & G  is the polar-opposite of Poseidon. Suite in C is something I listened to over and over again at the time. Ian McDonald and Michael Giles should be proud of themselves for this one album alone. It will be remembered far into the future.

A turning-point. I first heard this after returning from a tour of Ireland. This album was not KC and yet was KC. A shock to hear violin instead of saxes. LTIA Pt 1 - a masterstroke. VW and beyond. Then the 'live' versions from The Great Deceiver. Complete with the Wetton-Bruford rhythm-machine.

'A complete thought' according to RF. The final Starless always struck me as being the grand-playout for the counter-culture generation. That and Nick Drake's Pink Moon. The guitar solo on Starless showed the way out of the impasse of the self-indulgent early '70's virtuoso moments of the Page's and the Clapton's. It's as though at that moment we all waved goodbye to electric blues.

Another shock. King Crimson turned New Wave gamelan? I hadn't heard Steve Reich at this point. When I finally did it struck me that KC did Reich better than Reich himself. Frame by Frame is one of the strongest. Matte Kudesai is fabulous.

RF exposed. You Burn Me Up, I'm a Cigarette. RF rock 'n roll? It made more sense when I finally read Bennett and Gurdjieff. At the time it was a shock. Hammill on Disengage, Daryl Hall on North Star. And Terre Roche on Mary. This is a classic.

10) Peter Sinfield's Still tied with KC's The Power to Believe.

A House of Hope and Dreams and Song of the Seagoat are, certainly of their time but magical nonetheless. The four Adrian Belew haiku on TPTB are beautiful.

The power of this song lies in the snap (acciaccatura) at the beginning of the chorus.