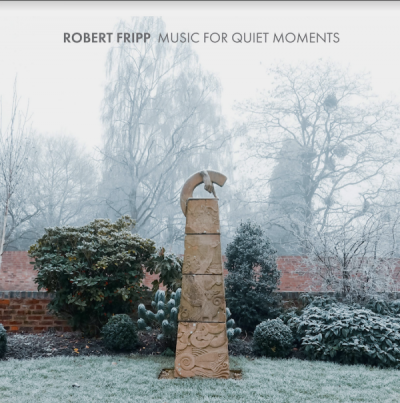 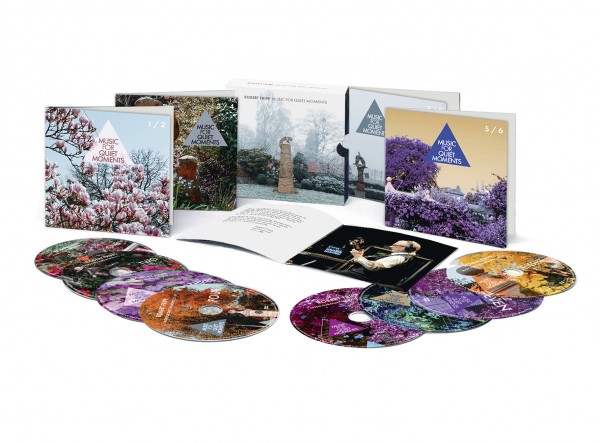 In May 2020 with much of the world in lockdown and reeling from the consequences of the Covid-19 pandemic, Robert Fripp began uploading the first of 52 individual soundscapes on his YouTube channel, streaming platforms, and DGMLive.

Entitled Music For Quiet Moments and appearing once a week, these pieces created a space for reflection, offering a means of pausing from the day-to-day concerns and to provide a point of calm and perhaps, a sense of hope, in such troubled times.

By way of introduction, Fripp defined what he meant by the term, quiet moment:  “Quiet moments are when we put time aside to be quiet. Sometimes quiet moments find us. Quiet may be experienced with sound, and also through sound; in a place we hold to be sacred, or maybe on a crowded subway train hurtling towards Piccadilly or Times Square. Quiet Moments of my musical life, expressed in Soundscapes, are deeply personal; yet utterly impersonal: they address the concerns we share within our common humanity.”

Each of the 52 pieces was drawn from Soundscapes’ performances from 2004 to 2009 and venues/shows as varied as those for G3 (Satriani, Vai, Fripp), to Churchscapes (as the name suggests, concerts in churches), opening act for Porcupine Tree and even appearances at ‘The Big Chill’ festival.

These pieces are contemplative for the most part and range from a few minutes in length to a performance of ‘Elegy’ in Nashville that lasts over 44 minutes. Each week this music became a gentle word-of-mouth success, as listeners eagerly awaited and discussed the weekly selections, with many encountering Soundscapes for the first time, marking their first contact with Fripp’s music as a result of the series.

While the series was not instigated with the idea of it being anything other than a weekly sequence of digital audio releases, when assembled and played back at a point when the series approached its end and all of the material had been selected, it became apparent that the series worked well as a single, distinct, body of work.

Now presented as an 8-CD set, in precisely the same running order as originally released, four sets of 2 discs each in miniature gatefold sleeves, with a booklet containing the artwork for each piece, housed in an outer rigid case, the set is released on November 19th, 2021.

Robert Fripp has been one of the most innovative and inventive British guitarists for over half a century.

Beyond his trail-blazing work with King Crimson, his collaborations with Brian Eno, David Bowie, Daryl Hall, Peter Gabriel, Blondie, and Talking Heads to name but a few have resonated with audiences around the world. In the 1990s his 1970s Frippertronics system gave way to Soundscapes and with it a new generation of performers such as Future Sound Of London, The Grid and many others were not only citing Fripp as an influence but eagerly having him appear on their records.

Some musicians inhabit genres, very few invent them, whether intentionally or arbitrarily credited with such. Fewer still continue to evolve, push forward, challenging both themselves and their audience.