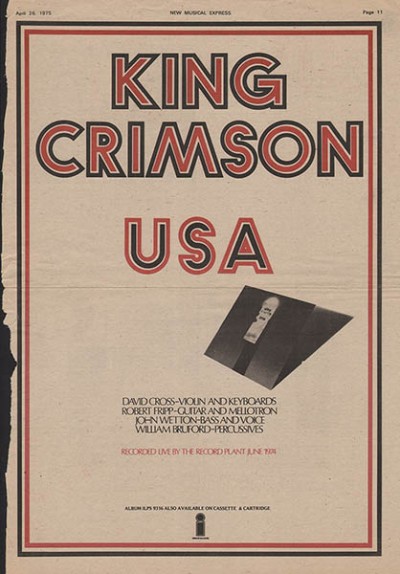 By the time USA was released, seven months had elapsed since King Crimson’s dramatic abdication. The trio that recorded Red had gone their separate ways. Bill Bruford had initially found work with Gong before going on to sessions with a diverse array of players including his ex-Yes colleagues Chris Squire and Steve Howe as they worked on their solo albums, as well as stints with National Health and eventually finding a home in the company of Roy Harper’s Trigger. Fripp meanwhile was busy getting his affairs in order as he prepared to enter JG Bennett’s International Academy for Continuous Education in Sherborne, Gloucestershire. Part of that process included tending to King Crimson’s recorded legacy and curating a live album that would act as the 1974 quartet’s swansong.

Fripp and Wetton had discussed the idea of a live album for the band during Crimson’s final American tour but only now, after the band had famously ceased to exist, did the pair finally get around to working on it. Wetton who at the time was on tour with Roxy Music recalls David Enthoven (Roxy Music and Crimson’s manager) asking him to get involved. “He said we'd have to do something about a live album from the last tour. So I said I don't have a problem with that, just tell what time the studio is booked and I'll turn up." Less than a week of studio time was booked at Olympic Studios where they had played together on Red in July the previous year. Working between 2pm and 8pm each day, the musicians settled on the gig at the Casino, Asbury Park, on June 28, 1974, for the bulk of the album with the gig at Providence two days later providing 21st Century Schizoid Man.

Listening to the tapes, it was felt that some of David Cross’s violin and electric piano parts were in need of being beefed up. With Cross off holiday around Ireland at the time, Wetton’s colleague in Roxy Music, Eddie Jobson was drafted in to undertake the repair work. Wetton recalls that Fripp and the violinist got off to a slightly awkward start. "Robert made the mistake of saying something like 'So, young Edward, you've come to give us a hand' to which a none-too-pleased Eddie replied 'My name isn't Edward — it’s Edwin'."

“My memory is that the invitation was from Robert Fripp, via EG Management.” says Jobson. “I don't recall there being more than one pass at each part, and I do remember that everything was done in one afternoon session.  Much of the session was overdubbing Hohner Pianet parts through a fuzz box to double and fatten the power riffs; something that was misleadingly credited as "piano."  That part was easy; but I do vividly remember having to learn the tricky part of 21st Century Schizoid Man on violin, on the spot, in front of Fripp and Wetton.  Only the violin solo couldn't be replaced, as it was leaking through the drum and vocal mics, and couldn't be removed.  My empathies were very much with David Cross, as I know how hard it is to play the violin accurately and in-tune in a loud concert situation and I didn't feel particularly good about being the one to replace the parts.”

After three or four days’ mixing and fixing, USA, the second live King Crimson album, was released in April 1975.

The cover, based on an idea by John Wetton and strikingly photographed by Willie Christie (who had previously worked on the cover to Fripp and Eno’s No Pussyfooting), featured an eerie visual echo of the Statue of Liberty. The photo of an outstretched hand used on the back cover came about while on tour in the States. “We’d received an invitation to go to Lamar University in Texas when we were playing there. They did this thing called Kirlian Photography and we went and had our auras photographed. I remember Robert trying to top his up in the sunshine, standing outside to make sure he had the best aura photograph. Of course they were all the bloody same!” laughs David Cross.

The band submitted their hands and faces to the experimental photographic technique developed in the Soviet Union by Seymon and Valentina Kirlian in 1949, which purportedly reveals the aura or field of energy surrounding all living material. The glowing hand seems emblematic of the unseen energies and musical ESP which the band frequently channeled in concert. Initially some consideration was given to using all of the Kirlian portraits but in the end only Wetton's hand was used.

Released in April 1975, without the momentum of a live touring band, the album barely caused a flicker in the country after which it was named and didn’t even chart on KC’s home turf. Critics were generally unimpressed save for the electrifying Asbury Park, an improvisation of such power it remains a favourite of Fripp, Wetton and Bruford to this day, as well as legions of fans. Undoubtedly the high point of the album its energy belies the fact that they were playing on a cold, rain-sodden evening to a half-empty house.

Coming straight after Exiles, an ever-eager Bruford performs a typically crisp snare roll, laying down a wonderful groove. Six seconds in Fripp can be heard shouting ‘F!’ across the stage. A couple beats later the bass grunts, the guitar growls and the band take a collective leap into the unknown. Listening to the Crimson blows of that final tour one becomes aware of distinct areas into which the improvisations fall; not a map exactly but definable, recurring motifs and moods. Were these consciously worked at or completely spontaneous?  “Improvisation and extemporisation; what’s the difference?” offers Fripp. “Extemporisation is what the musicians do and improvisation is what happens when it comes to life. Spontaneous composition? Trio (Starless And Bible Black, 1974) is an example of that. It was improv but it sounded written. The Sheltering Sky,(Discipline 1981) another example.”

You work with these musicians and you have some sense of how they might respond in a certain situation. Then you have Asbury Park - ‘F!’. All right, what are you anticipating might happen after that? Where is that going to go? Well, all you know is it’s going to begin somewhere around F and then, who knows? So you’re working with these characters; you know the areas they are likely to move to, and then sometimes it goes somewhere else. That’s what it is, and sometimes it moves towards a formal structure that can be formalised in a piece - or not.”

When reissued in 2002 as part of King Crimson’s 30th Anniversary editions, although tracks from the rest of the Casino gig had been added Fripp decided against undoing the edit at the end of Asbury Park and Easy Money which fades out on a sublimely meditative guitar solo. Though its release was welcomed by fans it was a frustrating experience for those wondering what happened next on those respective tracks. For that they would have to wait until 2005 when the unedited concert was the very first to be made available on Fripp’s DGM Live website.

Although he was only briefly involved in King Crimson, Eddie Jobson still retains an affection for the music he heard that afternoon in 1975. “One of my regrets, in hindsight, was that the political situation at EG between Roxy Music and King Crimson never would have allowed me to leave Roxy to join Crimson, had that even been a possibility in 1974.  However, given that I was pulled in to overdub on this album, and that UK originally started out as a reforming of the Fripp, Wetton, Bruford lineup plus me, I have always felt like an almost-King-Crimson-member with a particularly strong connection to LTIA Pt.II.  I feel an additional link to the track having played it on stage not only with Wetton many times, but also with Adrian Belew, Tony Levin, and Pat Mastelotto in Russia. The Red period remains my favourite Crimson period, and without doubt one of the defining periods of the genre.”