THE NIGHT WATCH - A NOTE FROM THE SOUND ENGINEER
Posted by Iona Singleton on Nov 7, 2016 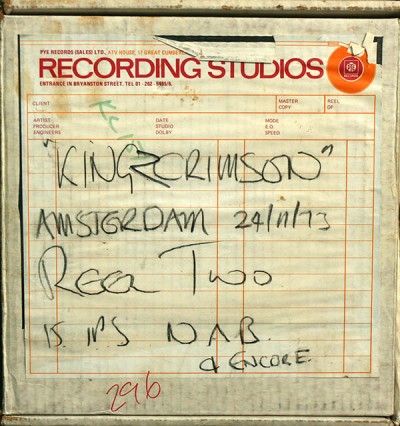 Every attempt has been made to reassemble this concert in its original form. With the exception of the improvisation “Starless and Bible Black”, which was edited in 1973 due to the constraints of vinyl, the music is entirely unedited. In certain cases, it has, however, proved impossible to faithfully restore the exact nuances of the original performance. Both “The Night Watch” and “Fracture” were overdubbed in the studio for use on “Starless and Bible Black”. The majority of these overdubs have been removed. In certain very limited cases, however, where essential parts have been erased from the original tapes, we have been forced to use the overdubs. It has also proved surprisingly difficult to discern the exact running order of the original show. There is a possibility that the show actually opened with “Larks’ Tongues in Aspic Part One”, which does not feature on any of the available master tapes.

There are several other small points worthy of note. The electronic buzzing in the second verse of “The Night Watch” is nothing less than the death sigh of David Cross’ ailing mellotron. For the rest of that piece, instead of playing the normal mellotron line, he can be heard improvising on his Hohner piano. Also, as is often the case with live recordings, the drum microphones moved around at will during the performance. To the distress of the drummer, the floor tom microphone is absent for most of the concert. All of which serves to remind us that live recording is at best a dirty business. It does, however, excellently capture the spirit of this night at the Concertgebouw, Amsterdam.

Taken from the sleeve notes to “The Night Watch”