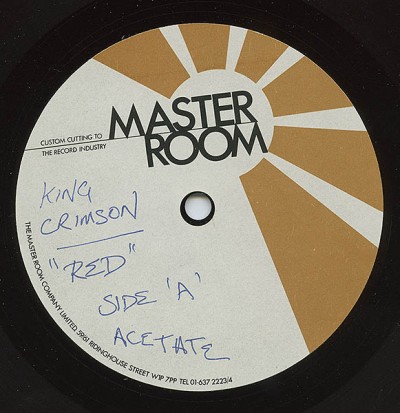 Perhaps more than any other King Crimson album, Red captures the sense of change and expectation that permeated the air as Bill Bruford, Robert Fripp and John Wetton entered Olympic Studios on 8th July 1974.

The tangible sense of momentum within both band and management had been reinforced in part by the triumphant culmination to months of touring at New York’s Central Park just seven days earlier. Fripp noted that this was “the first gig since the 1969 Crimson where the bottom of my spine registered ‘out of this world‘ to the same degree”.

Most in the Crimson camp sensed they were on the edge of breaking into the big league of commercial popularity, with the removal of violinist David Cross following their return to the UK, offering exciting possibilities.

Yet alongside such optimism, doubt and uncertainty were present especially on Fripp’s part, then actively considering taking a sabbatical from the band in order to follow up the spiritual awakening experienced after reading the work of JG Bennett.

Unaware of his inner turmoil, Bruford and Wetton had to deal head on with its fall-out as Fripp informed them he would be withholding his opinion during the recording sessions.

Much like the portraits used on the cover (immediately christened by the band themselves, “the good, the bad and the ugly”), it was against this backdrop of shadow and light that the recording of the 7th King Crimson studio album took place.

Red was the first piece the trio tackled. Although elements of it had surfaced in rehearsals in May, as well as sound checks and during live improvisations, this was the first time the bulldozing piece had been formally laid out.

Although long-acknowledged as a crucial part of the Crimson canon, Red’s appearance on the album was by no means certain with Bruford initially unconvinced about its see-saw melody. “I said fine, we don't have to use it” recalls Fripp “John urged for its inclusion. Bill said something along the lines of 'I don't get it, but if you both say it's good I believe you’”.

The brooding cello section on Red marked the first appearance since 1971 of guest players on a Crimson album. Others included oboist Robin Miller and cornet player, Mark Charig (who’d last appeared on Islands) providing distinctive contributions to Fallen Angel, a track built in part from an unused Wetton ballad called Woman and a Fripp riff first used by the LTIA quintet in October 1972.

Perhaps the most significant guest however was KC founding member, Ian McDonald. Wetton in particular was keen to see join him the line-up on a permanent basis: “My thinking was that Ian in the band would have possibly pushed us into Pink Floyd territory, out of the cult status that we were just beginning to move out of."

McDonald’s first of two appearances is on One More Red Nightmare whose strident theme had been developed from live improvisations. The track is of course notable for its exhilarating cymbal breaks. “They’ve become a bit legendary in part because of the fabulous trashy 20-inch Zilko cymbal I found in the rehearsal room rubbish bin” recalls Bruford. “Much of my contribution was inspired by Billy Cobham, who was hugely influential at the time.”

The inclusion of the live improvisation, Providence, continued a practice begun on the previous album, Starless and Bible Black, and one born from necessity. “We were always short of material. We resorted to live improvisations which were more or less effectively disguised as such by avoiding or removing any applause.” explains Bruford.

The epic track Starless had been part of the live set since mid-March. Now honed and refined, it receives its definitive recording here, touching upon all aspects of Crimson’s history along the way. Hair-raising contributions from guests Mel Collins, Robin Miller and Ian McDonald, as well as uncredited cello and double bass players whose dramatic appearance at the the climax of the track, all adds to its undeniable magisterial power.

“We always knew that Red should start the album and Starless should finish it. It makes the album sequence like a live show.” observes Wetton. If Starless was partly an elegy to Crimson’s past, saluting the grandeur that had made such an impression in 1969, then Red was definitely a prediction of things to come.

The album’s legacy continues to be felt long after Fripp’s announcement in September 1974 that the band had “ceased to exist”. A proto-heavy metal sound, it is also frequently cited as an influence on musicians as diverse Henry Rollins, Curt Cobain and Tool. In 2000 The Mojo Collection’s assessed Red as “that rarest of records, the sound of a line-up quitting while ahead” seems especially apt.

For Steven Wilson remixing the album into 5.1 was instructive. “What I hear on Red is the best representation of 72-74 era line-up in the studio. They seem to have finally realised how to get most of that live energy onto tape. In effect this is a power trio record whose sound is just huge. Often its just a single guitar but the thing is, the bass almost has the role of second guitar because it’s got so much fuzz on it and it plays in a high register a lot of the time.”

Wilson’s approach was to provide a three-dimensional representation of what he heard as a cooking live band. “I moved the drums and the bass a little more out into the room tending to put Robert more at the back so you get this idea of standing in the middle of these three musicians.

The quality of the sounds going down onto tape are terrific. Unlike earlier albums, where they probably had to do an unbelievable amount of EQ to try and make up for the deficiencies of the studio sound in the mix, with Red you just push the faders up and it simply takes your head off.”