DISCIPLINE - THE LONG VIEW
Posted by David Singleton on Nov 3, 2016 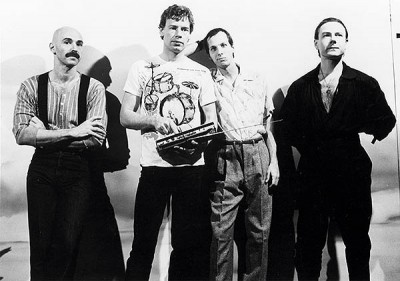 No matter how disparate their context or setting, a certain unity ran through elements of tracks such as Larks Tongues In Aspic Part 1, Fracture, Talking Heads’ I Zimbra (from 1979s Fear Of Music and on which Fripp guested) and 1980‘s The Zero Of The Signified (from Fripp’s Under Heavy Manners). All bore the hallmarks of fast, cross-picked, cyclical guitar lines which rippled and leapt across the grooves of a rock-solid pulse.

Yet despite the littering of such clues, when released in September 1981, the boldness of Discipline’s taut outlines, coupled with the depth of harmonic and rhythmic ideas it employed, seemed light years distant from the textures of Crimson past, wrong-footing some commentators and fans in the process.

Whilst there was a reassuring continuity with recent times past in the shape of Fripp and Bill Bruford, the Anglo-American nature of the band with the recruitment of Tony Levin  and Adrian Belew, embodied and underlined the heady shock of the new and the desire to embrace change.

Though Bruford and Fripp had auditioned several hopefuls for the role of bassist (including Bruford’s talented bass player, Jeff Berlin), Tony Levin was always Fripp’s first choice. The auditions had only taken place because the guitarist had assumed that the ever-busy Levin would be unavailable. As Fripp noted in his diary, "Because Tonly Levin is so busy it never occurred to me that he would be interested in a band, otherwise he would have been my first call."

“By the 1980s I was, in fact, moving away from being a 'session musician’” recalls Levin.  “I had met Robert on the Peter Gabriel recording in 1976 and had been touring since then with Peter. That first recording with Peter was momentous for me in that it introduced me to the talent of both Peter and Robert.  When scheduling was possible, I would, without hesitation, have joined any project that involved either.  So it was the chance to make music with Robert that got me to the first 'rehearsal' of Crimson, back in 1981.”

What had attracted Fripp to Belew’s work? "The energy” says Fripp. “I saw Ade first with Bowie at the Madison Square Garden on the "Heroes" tour I didn't play on and we met personally at The Bottom Line in New York when Ade went with David Bowie to see Steve Reich, and I was there to do the same independently.”

As well as finding one of the best front man a group could have, Belew’s instrumental presence enabled Fripp to make the interlocking parts he’d envisaged and had been steadily working towards a reality. Perhaps the most telling example of this is Frame By Frame, whose phase-shifting pointilism draws heavily on Steve Reich’s minimalist aesthetic.

Belew’s ear for detail and his astonishing capacity to create elliptical solos of unorthodox and ingenious ferocity, made his contributions to David Bowie, Frank Zappa, and Talking Heads so distinctive. In Crimson he was also given free rein to mine an unorthodox vein of expression in pieces across the galloping meter of Thela Hun Ginjeet, and the acerbic but playful Elephant Talk.

The Sheltering Sky, first played as an improvisation within the walls of an ancient Dorset hunting lodge where the band initially rehearsed is a perfect example of where the sounds of the old world rub up against new technologies to eerie, and sometimes unsettling effect. With the ancient resonance of Bruford’s African slit drum, the soaring, trumpet-like sonority of the Roland guitar synthisiser, and the subterranean growl of Tony Levin’s Chapman Stick, it sits somehow aloof and apart from the period in which it was was recorded. Even today, some 30 years after it was committed to tape, it remains utterly timeless.

Much like the knot-work relief which graced the spartan cover, Discipline, is about the interconnectedness of ideas and experience harnessed together. Remove any one element of those threads and the whole thing will unravel. Whilst some of Crimson’s contemporaries had been content to either rest on their laurels or make a straight forward dash towards commercialism, every sinew of the Discipline-era group and its sound glistened with a dazzling freshness, a supple brilliance that effortlessly surfed the post-punk new wave zeitgeist whilst remaining consist with its core guiding principals.

After making their live debut on April 30th 1981 at Moles Club in Bath, under the name of Discipline, an excited Fripp noted in his journal “For me, this is the band I've spent four years getting ready for." Later he would note “...if all this band does is one album, it'll be worth it.” Just 19 days after that live debut and following a short tour, the band assembled in Island’s Basing Street studios to begin recording their first album together.

The next time they took to the road in October King Crimson had returned . "It was tortuous going out as Discipline because promoters would immediately halve the money because nobody knew the name," explains Bruford.  "I quite liked the name Discipline actually because I'm British and I knew what Robert was getting at with it, but when somebody told me it had changed to Crimson I thought ‘good’ because at least it removed one obstacle to the band's progress."

For Adrian Belew, whilst extremely proud of the permutations Crimson has undergone since becoming a member of the group, the Discipline-era remains closest to his heart. “I think it was probably the best band in the world at the time! It was just the perfect line-up, and perfect combination of things; heavy, light, fun, and dark. I just think there was something absolutely marvellous about that band. That first record we did is the proof. It’s still ground-breaking. It still doesn’t sound like anything else you’ve heard before. A 20-something kid can put that record on and think that it must have been made yesterday, and I still don’t understand how we did it!”