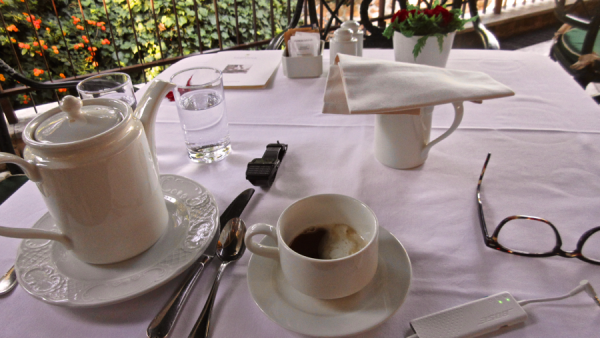 … Until today posts were practically just enthusiastic: some complaints about audio quality, some notes in margin For that or that mistake but in general a great joy…

… what brings the posts of the second wave to be often more critical than those written immediately after the show? Perhaps the first to write in the post-concert are the enthusiasts while who has had doubts or has not lived an unforgettable evening takes a while to decant thought and put it in writing? Or is there still a bit of fear in writing something negative about "our heroes" in the group?

If you want to talk about it I ask you to consider only two things:

1-band members read us. They often read us and do it even more often on the occasion of Italian dates. If you want to write something personal about how to be one of the members of the group more than a specific feature that just doesn't go down, know that you might read it…

2-these days there is an atmosphere of great joy in this group… Let us ask ourselves whether the way we talk about our feelings is constructive or not.

My view: please, feel free to present whatever criticisms you feel useful, and/or necessary. Better to be criticized by someone who has seen the band, than praised by someone whose head is placed where sunshine never falls.

At soundcheck yesterday Jakko mentioned a recent online comment: Jakko is the worst ever King Crimson singer!  After we had sound-checked Peace I told Jakko: I’ve heard Greg Lake sing that! Whoever specifically presented this wonderful dopey post, comments of this quality I ascribe to Mr. I-Am-Not-A-Troll! at Regressive & Recessive Ears. This person is impersonal, a state of being, whomsoever it lives within.

The technical and executive mistakes within the band are known and noticed, and little escapes us. For various reasons, discussed at Royal Packages, it is almost impossible to play accurately a KC performance of between two hours and forty-one minutes (the shortest overall running time on this tour), and three hours eighteen (the longest). Mistakes are less interesting to me than the recoveries: everyone makes mistakes, but it takes a good player to recover.

It is necessary in life that we make mistakes, the High Road to learning. That noted, I am not sure this band needs to make as many mistakes as we do. Actually, I am pretty sure we make far more mistakes than strictly necessary. But our mistakes are inevitable and allowed for in the construction of the music: the Crimson Minefield.

A wider view of mistakes and recovery from 1994…

Redemption is a process of repair in which the repair job may become stronger than the original model. The work of redemption is underway in the world on such a colossal scale, and so close to us, that we may not see it.

The possibility is always available, despite the limitations and restrictions placed upon the event, that the action taking place within the act of music may change our lives.

Perhaps we have noticed that the world with which we are familiar is collapsing. The abrogation of responsibility, by those in positions of power towards those dependent upon them, is a leitmotif of our recent history: political, personal, professional and moral violation is endemic in contemporary culture.

The new world is struggling to be born, carrying passive repercussions of the past and facing active opposition from the old. The future is in place, and waiting, but we have yet to discover it. Our present position is the bridge between. This position is hazardous, because we are building the bridge while crossing it.

A reasonable person might despair; but Hope is unreasonable. Artists, musicians and poets deal in the unreasonable on a daily basis.

The outcome is not guaranteed. 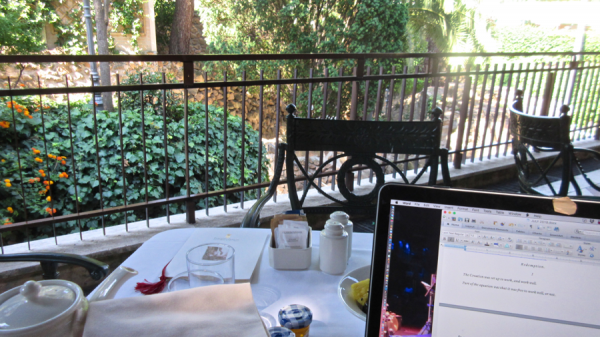 22.14 Hotel Acceptable On The Beach, Viareggio.

On the bus c. 11.40, setting off from Rome c. 11.55. Dropping off the Technical Team in Lucca at Hotel Despair of the Best Western variety, c. 16.15. There were not sufficient hotel rooms available for all of us in Lucca. Driving here to our hotel, the coach driver took a right turn to Pisa, rather than straight ahead to Viareggio. He stopped, reversed up the junction, and continued no. Good to know that in Italy traffic laws are advisory, rather than mandatory.

Arriving here c. five hours after setting off. Coffee in the downstairs bar with Mr. Bill, and to a modest salad of the Creative Variety in Hotel Restaurant Posh… 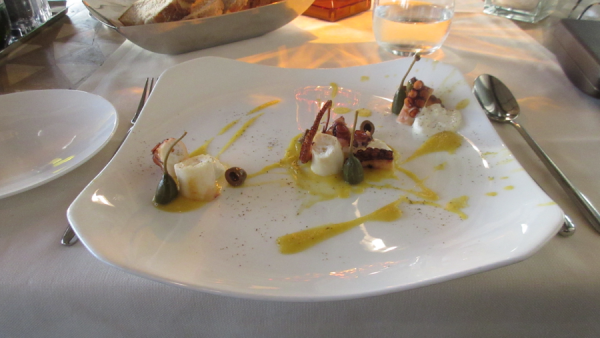 Were I to have re-arranged the total ingredients, they would have fitted onto a dessert serving-spoon. But the “salad” did look like art. To the room for unpacking and practising.