Morning Sitting in the Study.
Morning reading and writing… 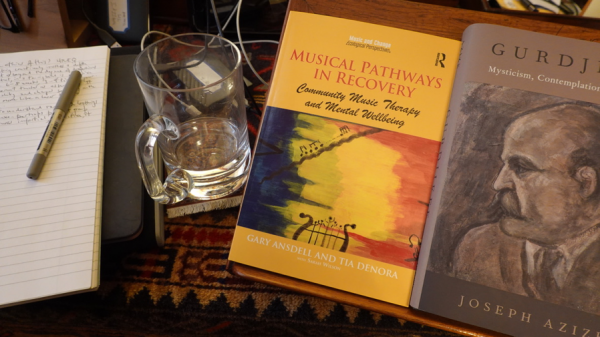 What are the ethics of presenting a commentary on our workings with others?

Any creative work involves a depth of personal contact that goes beyond the professional. Professional contact itself, for a touring band, is already extensive and intensive. Maybe 24/7 for six-eight weeks, perhaps twice or four times a year, perhaps for a one-three-seven year period. But creative endeavor touch us essentially: it moves beyond the personality and changes something on the inside, more like a lover than a colleague in the workplace. This makes it easier to understand the rancor and loathings of group members, mostly former but some locked into the ongoing repercussings of a creative undertaking. If our love were true, things would be different. So, it’s mostly otherwise and very much what it is.

Why do rock groups fall out? This might be a chapter in an –ology book (sociology, musicology, psychology, philosophicalology). Might even be a book in itself. Even a series of separate tomes for just about every well-known rock group, and most of those we’ve never heard of.

Meanwhile, an excerpt from the RF Tour Diary for 2003…

Rising late at 09.30. I was up late packing and de-vibrating from the performance (on Wednesday evening). I enjoyed a glass of bubbling solution with Martha and Ade Belew, upstairs in Chateau Belewbeloid, back from Soundcheck. Martha’s views of the band, and of the dress rehearsal, were useful as always. Supportive while frank, and quite unlike any other commentator on the band. Martha made the point, so commonplace it is overlooked, of the psychological damage inflicted by the music industry on its artists. The norm for employment is a weekly or monthly salary, with employees knowing how much they will get and when. For artists, record and publishing royalties get paid every six months. You don’t know…

This is standard practice and utterly commonplace. Probably, with Enron and other recent US corporate scandals, what is long-term standard for the music industry has now moved into the clear view of daily mainstream America.

Martha spotted the massive BMG under-accounting, presently being settled in England. Adrian’s then-manager didn’t believe her: the failure was so enormous, he didn’t believe it possible for a MegaCorp to be that dysfunctional. He was wrong. BMG in London didn’t believe it was possible either, until a threat of litigation encouraged them to examine the evidence more closely. Martha was right.

Then, bottle empty, a return to The Basement and a piece of cheesecake that had appeared on the Lunar Module, anonymously, at the show.

As I rose at 08.35, following a period of wakefulness, I found myself wondering why no money has yet arrived from the huge sums of unaccounted royalties acknowledged due by Virgin and BMG. I shall now make a call.

12.00     DGM HQ tells me that the issue with BMG lies in a few small words that cover the area of settlement.

I know from experience in dealing with BMG that "the problem with vocabulary is that words don't mean what you want them to" (this is a direct quote by a BMG Music Power Posessor). My experience is somewhat the opposite. Words can mean exactly what they say, particularly where the words are chosen precisely to convey an intended meaning.

Words are not a language as direct as gesture. Nor are words as rich a language as symbology. But, in the functional world of concrete action, Anglo Saxon works for me. Maybe it just doesn't work within a range of one hundred yards north of Putney Bridge.

We are loading onto the Crimbus for an overnight drive to Boston.

Tonight's performance at the Tower had wonderful clunkers and a supportive audience, bar the jerk with a camera. His surreptitiousness suggested he knew, but didn't care anyway. The Tower is a dreadful venue and one that features on most visits to Philadelphia. I am close to accepting that whoever plans our tours, and sends us into these wretched places, has no intention of finding an alternative approach to live performance. So, rather than trying to find venues to accommodate the music, I am now tailoring music to survive in the spaces we are sent to - the strokes are broader. Fortunately, this band is well able to fill in the details if circumstances permit.

We arrived at the hotel around 10.45, dribbling gently.

14.16       This is a town that can be very lonely for me. Out the back of this hotel is a view of Old Quebec, with the Chateau Frontenac prominent. The Peter Gabriel tour c. April 1977 stayed there. It was in a lonely room at the Chateau, if not a garret then a room that felt like one, that I looked out and watched ice floes slowly drifting down the river. The burning issue of that day was whether to reform King Crimson 1974 with Billy B and Johnny W.

I was recently out of Sherborne House (July 1976), even more recently moved to NYC (February 1977). The wounds from 1973-4 where not quite bleeding, nor were the scars quite healed. The future was open, wherever it might lead. Might it lead to Crimson? If there were to be so, the concern for me was to find a front-line partner strong enough for us to hold our own against the back line of John and Bill. That back line was monstrous, loud, busy, and uncaring for the needs of the front line. John was keen for me to choose Eddie Jobson as my partner. I wanted time to consider. There was also pressure from EG Management, for various arising EG personal and business reasons. Looking out of a garret window at the Chateau Frontenac, I knew this was not a venture for me and telephoned David Enthoven at EG in London to give him my decision. The band became UK with Eddie Jobson and Alan Holdsworth joining John and Bill.

If anyone were interested in discovering my contribution to King Crimson at the time (by which I mean myself, looking back and reflecting on the period) then the distance between King Crimson 1973-4 and UK is a quick guide to what I brought to bear in Crimson. This does not imply that Crimson is good - UK is bad, and is clearly an exaggeration. It is also a clear picture, in broad strokes, of the nature of my contribution.

… in D flat major, the key of Frank Sinatra and Dinah Shore, duetting on her tv show in 1958. The guitar is handmade by Paul Vreke of Rotterdam and is the GC model. Tuning is the GC NST, C major pentatonic: CGDAEG.

17.10         Off to Country Manor Hotel Most Acceptable c. 13.00. Venturing out after five months at home for a treaty lunch at one of our fave local El Posho food providers, where food is art.

Listening begins from a place of quiet within us. Until then, we only hear what we believe ourselves to be hearing. This doesn’t imply that performance, even Crimson performance, should be a place where we behave ourselves: earnest audients, sitting motionless and reverently - perhaps in front of the Beastly Belewbeloid, showing us how to have a good time with guitar and voice; or Beast-of-Terror Mastelotto, effortlessly demonstrating how natural modesty need not constrain and restrain having a good time and supporting your Band Buddies, while hitting all manner of things electronic and acoustic simultaneously and in more time signatures than is possible to remember anyway; or Trey, presenting presence, listening, humour and ongoing invention. But you should sit unmovingly and silently in front of the grumpy old man in the blue-dark because, if he manages to live until the end of the show, he might be mean to you and spit on your foot.

With Adrian, what you see is what you get.

With Robert, what you don’t see is what you get.

With Trey, what you see is not what you’re getting.

With Pat, it keeps going.

Wow! It’s amazing that a man that old can even pick up his guitar and breathe for the length of a show which is too short anyway but maybe has to be short because he’s very old or his prostate is shot. 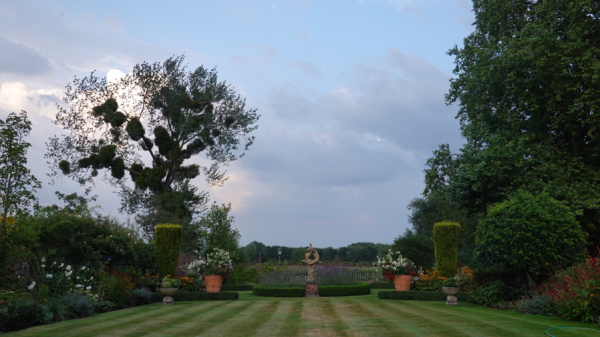