Idle thoughts that fill your head, as the coach takes you from the airport to another hotel : There was a large billboard advertising the dual delights of a local politician and a forthcoming show. Which is more important, I wondered - the politics we vote for or the music we love. Or posed more dramatically, “Which has greater influence on humankind, Art or Politics?” In this age of Brexit and Trump, it would seem obvious that the answer must be those pesky politicians who fill our screens, taking us in or out of Europe, repealing or not repealing ObamaCare. My grand-mother in her later years, however, was remarkably unfazed by the apparently dramatic political swings : “Everyone says it will be the end of the world, but it never is. The sun continues to rise.” And she was right, of course. If we take a longer view of history, Art is a strong contender. Choosing a random ruler from the past, does the legacy of George II of Great Britain in any way compete with that of his court composer, Handel, whose glorious music lives on (and was played at my wedding over two hundred years later)? Even the acts of his grandson, George III, who managed to lose a small unimportant slice of the British colonies (yes, that would be the American War of Independence), pale in comparison. The USA would have become independent anyway, sooner or later. One can make similar arguments about Shakespeare and Queen Elizabeth I. Or more recently perhaps about The Beatles and the swinging sixties. At some time in the future, it is possible that all that “swing” may have swung back in an entirely different direction. A long period of Liberalism may be followed by one of Illiberalism – the music of the Beatles will still be there, helping us to understand who we are.

The largest political dilemmas of our time would seem to be those of global warming and over-population (ones with which our democracies, with their relatively short election cycles, seem to struggle). But even if we reach the end of the world (the one my grand-mother said would never come), I imagine an extra-terrestrial colony of humans will still be listening to Beethoven and Mozart. And who knows, maybe even King Crimson.

A pleasing thought that the band playing at the inaugural bash for a President, or the composer for the coronation might actually have more long-term influence than the head that wears the crown.

Meanwhile some photos from the lovely venue in Minneapolis, and hopefully when I look at my camera from tonight, I may have captured the beautiful turn-of-the-century Chicago Theatre. In general with this tour, these are all wonderful venues for King Crimson. 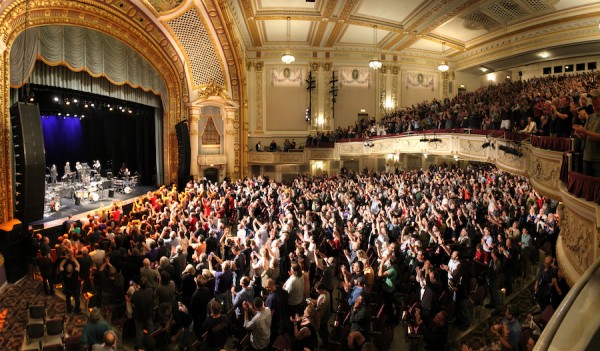 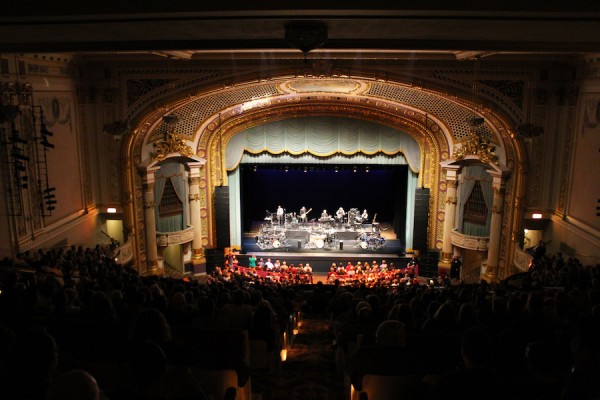